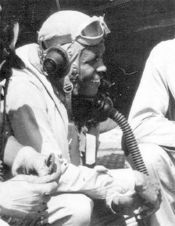 Woods' flew more than 100 missions as a member of the 99th fighter squadron of the 332nd fighter group. His plane was shot down over Greece in October 6, 1944. He remained a prisoner of war in Greece until April 20, 1945 when the camp was liberated by Patton's army. Woods retired from the Air Force as a Major.

Woods and his fellow Airmen received the Congressional Gold Medal in 2006. He died of cancer in 2007 and is interred at Greenwood Cemetery in Montgomery.