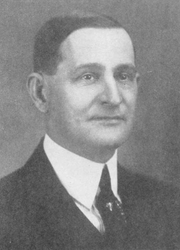 This article is about the former Birmingham schools teacher and administrator, for other uses, see Charles Brown (disambiguation).

Brown was the second of three sons born to William H. and Kathleen Billingsley (Henagan) Brown of Sumter County.

Brown was hired by the Birmingham system in 1893 as a science teacher for Birmingham High School. He was appointed principal of the Henley School when Frank Roof resigned to become president of Howard College in 1897. He was promoted to principal of Central High School after the death of J. B. Cunningham in 1907. In 1921 he was promoted to associate superintendent under John Phillips.

Brown died in 1939 and is buried at Elmwood Cemetery. At the suggestion of the Kiwanis Club of Birmingham, Brown Elementary School in Belview Heights, built in 1951, was named in his memory.

Brown's younger brother, Darby, was one of the founders of the Birmingham Infirmary.