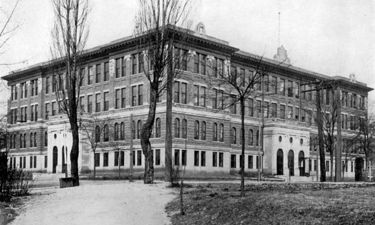 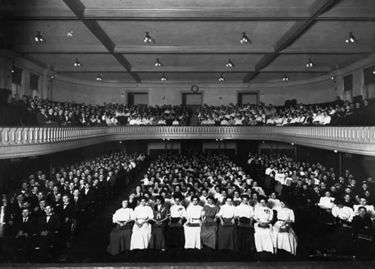 Interior of the school's auditorium, c. 1911

Birmingham's Central High School, also known as Birmingham High School, originated in the first high-school level classes given at the Free School which was established in 1873 by John T. Terry and James Powell.

In 1883 the high school students were moved to leased rooms in the Wright Building on the northeast corner of 19th Street and 3rd Avenue North. The presence of a steam laundry on the first floor of that building proved detrimental to study. In 1890 the entire Enslen Building at 608 21st Street North (the present site of the Tutwiler Hotel) was leased to the school board. That building served the school until a new building was finally completed in 1906.

The first dedicated building for a Birmingham High School was built for $160,000 on the site of Terry's home at 2316 7th Avenue North. The four-story 50-room school opened its doors on February 6, 1906. It was renamed Central High School following the Greater Birmingham annexation of 1910.

The school burned to the ground on February 12, 1918. Students attended classes at the Paul Hayne School and the Medical College of Alabama until a new high school could be completed. In 1923 Central High School was replaced by Phillips High School, named for John H. Phillips, superintendent of Birmingham schools from 1883 to 1921.