Ensley High School is a former Birmingham City School, located at 2301 Avenue J in Ensley. The school was founded in 1901 and moved into a new building in 1908. It closed after the 2005-2006 school year, with students transferring to the new Jackson-Olin High School. The vacant former school was heavily damaged by a fire on July 17, 2018.

The high school's three-story 184,456-square foot building was designed by architect David O. Whilldin and occupied an 8-acre site with athletic fields and parking lots. A separate competition gym and weight room added 20,000 square feet of enclosed space. The last principal at Ensley High School was Ethel Knight. The school's colors were black and gold and their teams were known as the "Yellow Jackets".

Ensley High School was founded in 1901 to serve the then-independent community of Ensley, which was centered around major plants operated by U. S. Steel and the American Cast Iron Pipe Company. It began with classes held at the Old Bush School before the high school building was completed. The school was originally divided into only grades 9-11. Only two students, Margaret Wright and Mattie May Williams graduated in the school's first class of 1903. 10 more graduated in 1904, 10 in 1905 and 16 in 1906. There was no class of 1907 as the school added a 12th grade. The next two graduating classes were comprised of three and eight girls, respectively.

The school was absorbed into the Birmingham School System when Ensley was annexed into the city in 1910. For most of its life, Ensley was, along with Phillips, Ramsay, Woodlawn, and West End, one of Birmingham's "Big Five" high schools with notable academic and athletic traditions and rivalries.

During its first decade, Ensley principal Roy Dimmitt, assisted by student Joseph Kantor compiled detailed statistical data on the performance of the 152 boys then enrolled in order to determine the degree to which cigarette smoking affected their "efficacy". He found that the students who smoked were consistently outscored by their non-smoking counterparts. By his calculation only 26% of the boys at Ensley High School were smokers, but almost two thirds of those who failed a year or withdrew from school partook of tobacco. His findings were published in Henry Ford's 1914 anti-smoking volume "The Case Against the Little White Slaver."

A major addition to the school was completed in the spring of 1926, increasing the capacity from 947 to 2,050 as the city's high school enrollment ballooned. Erskine Ramsay donated a $500 pottery kiln for use by the art department in 1930. 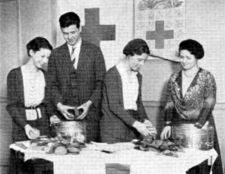 In 1936 more than a hundred students at Ensley High School contracted food poisoning which was traced to cream puffs purchased from a local bakery. The Jefferson County Department of Health, which had been unable to maintain their inspections program during the Depression, found conditions at the bakery to be "filthy".

In 1945 student Charles Hubka and other distributed a mimeographed newsletter entitled the Subterranean Gazette in which it was claimed that faculty exercised "dictatorial methods" to domineer the elected student government, and attacked the character of some on the faculty, including the football coach. When Hubka was suspended from school, as many as 25–30 students staged a walkout.

In the late 1940s a plaque honoring graduates who had served in World War II was installed outside the school auditorium. A 1969 interior remodeling brought new paneling to hallways and offices, and new ceilings, lights and desks to classrooms.

Previously an all-white school, Ensley High School was formally integrated, without major incident, in September 1964. Nevertheless, persistent racial segregation in the Birmingham area, especially after the loss of Ensley's major industries, made it so that the student body had become overwhelmingly African American by the mid 1970s. In recent decades the high school was repositioned as a "magnet school" within the Birmingham system.

In 1994, Ensley High School was the site of gang-related violence when Andre Allen, 15, was shot in the chest outside the band room during the lunch period.

In 1999 girl's basketball coach Roderick Jackson tried and failed to get the school and board of education to give his team access to the same equipment, transport, and funding enjoyed by the boy's teams. He was fired from his coaching job and sued under Title IX, 1972 federal legislation that requires non-discrimination in publicly funded education programs. Lower courts upheld the firing but the United States Supreme Court faulted their decisions and called for new hearings on the merits of the case. The Birmingham Board of Education settled the dispute with Jackson in November 2006.

The school was one of two in the Birmingham system that offered a Young Mothers program to encourage students with children to stay in school.

The percussion group Phi De I got its start when members of the Ensley High School drum line decided to continue practicing after the 2003 school year ended.

Ensley Magnet High School was closed following the 2005-2006 academic year. In May 2006, valedictorian JaVone Williams led the 134 members of the school's last graduating class across the stage to receive their diplomas at Bill Harris Arena. In Fall of 2006 Ensley students merged with students from the old Jackson-Olin into a newly-built Jackson-Olin High School. Due to ongoing fights between students from the two former rivals, the Birmingham Board of Education hired a mediator and added a co-principal position to restore order.

The WWII veterans plaque was removed in May 2006 by alumnus James Pratt. With help from several alumni, it has been rededicated at the downtown Veterans Affairs Medical Center.

In February 2009 schools and operations chief Samuetta Drew proposed using the former high school as a storage warehouse and to provide office and garage space for the system's transportation fleet. A fire damaged the vacant building in July 2018. In June 2019 the Birmingham City Council voted to purchase the school campus from the Board of Education for $50,000 and made plans to solicit proposals for redevelopment of the property.

In February 2021 a proposal was put forward by Zimmerman Properties of Atlanta, Georgia with David Baker Architects to demolish most of the school building while adapting the former gymnasium for a produce market or grocery tenant. The rest of the site would be redeveloped for 244 residential units and a 43,308 square-foot garage. The Birmingham City Council agreed to sell the property for $50,000 and to apply $1.25 million in HUD HOME Investment Partnership funds to support the project.