The Birmingham Post-Herald was a daily newspaper in Birmingham with roots dating back to 1850, before the founding of Birmingham. The final edition was published on September 23, 2005. In its last full year, its average daily circulation was 7,544, down from 8,948 the previous year.

The Birmingham Iron Age was launched as a weekly newspaper in 1874. By December 1881, the paper had changed hands several times and the current owners launched a second, daily newspaper called The Daily Age. With the addition of national and world news items from the Associated Press the Age reached a peak of success, ranking second only to The Atlanta Constitution in the Southern market in advertising dollars.

On August 3, 1887 William Pinckard began publishing a rival newspaper, The Daily Herald. After a year as competitors, the Age and Herald merged on November 8, 1888, to form The Birmingham Age-Herald. This combined paper was sold in 1896 to an upstart rival, The Daily State. For two years it was published under the Daily State Herald masthead before controlling interest was sold to E. W. Barrett and the Age-Herald name restored.

In January 1921, The Birmingham Post was launched by Ed Leech and Scripps-Howard. In just five years, the Post's circulation grew from about 8,000 to 48,536. 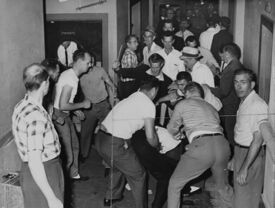 Another merger occurred in 1950 when the Age-Herald joined with The Birmingham Post. By the terms of the merger, the News and Scripps-Howard-owned Post-Herald became independent papers published under a joint operating agreement. Circulation, advertising and printing were provided by The Birmingham News Company. The Post-Herald published Monday through Saturday mornings while the News became the sole evening and Sunday paper. The first issue of the combined Post-Herald was published May 15, 1950.

The Post-Herald figured in several episodes of the civil rights movement. Post-Herald photographer Tommy Langston's 1961 image of Ku Klux Klan members attacking Freedom Riders attracted national attention because it showed FBI informant Gary Thomas Rowe in the violent mob. Langston himself was badly beaten after taking the picture. In 1962, Post-Herald editor Jimmy Mills was arrested for publishing an election-day editorial suggesting how citizens should vote. Mills fought his conviction all the way to the U.S. Supreme Court, which held in Mills v. Alabama that the state could not prohibit campaigning on election day.

The Post-Herald's Week-Ender entertainment supplement expanded into the Kudzu section under the editorship of Emmett Weaver.

In the mid 1990s the News Company instigated a switch between the morning and evening publications, again creating a joint weekend edition (distributed on Saturdays). The Post-Herald's first afternoon edition was dated August 5, 1996. This move reinforced The News' pre-eminent role in a time when morning papers are the norm. Towards the end of its existence, the Post-Herald adopted a niche of emphasizing more detailed local stories and featuring well-known local columnists.

The long-expected closure was announced to staffers and then to the public by E. W. Scripps executives on the morning of September 22, the day before the final edition. The announcement said that the Birmingham market could simply no longer support two newspapers, thus continuing a trend of big-city afternoon newspapers either folding or merging with morning newspapers.