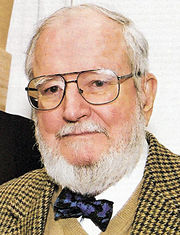 Frank Moore Cross (born July 13, 1921 in Ross, California; died October 16, 2012 in Rochester, New York) was Professor Emeritus of Harvard Divinity School, notable for both his work in the interpretation of the Dead Sea Scrolls as well as his analysis of Deuteronomistic History.

Cross was the son of Frank M. Cross, a long-time pastor of Ensley Highlands Presbyterian Church. He graduated from Ensley High School in 1938 and then went to Maryville College near Knoxville, Tennessee, completed a bachelor of arts in 1942. In 1946 he finished his bachelor of divinity at the McCormick Theological Seminary in Chicago, Illinois and went on to earn a Ph.D. in semitic languages at Johns Hopkins University in Baltimore, Maryland in 1950. He taught at Johns Hopkins and at Wellesley College and at McCormick until 1957 when he was appointed an associate professor at Harvard Divinity School.

In June 1953 Cross was invited to become one of only two American scholars on the international committee responsible for conserving, translating and editing the Dead Sea Scrolls, discovered in Qumran, Palestine (then part of the Kingdom of Jordan). His first assignment, funded by a grant from the Rockefeller Foundation, was to clean 61 of the manuscripts found in "Cave 4" in preparation for photographic recording and publication. He made a study of the particulars of the script style (its "palaeography") which has contributed to our historical understanding of both religious and non-religious Jewish scribal documents. Over the course of his study, he identified hundreds of scroll fragments in the hands of Bedouin tribesmen which he helped to acquire and publish.

In 1958 Cross was named Harvard's Hancock Professor of Hebrew and Other Oriental Languages, Chair of the Department of Near East Languages and Civilizations, and Curator of the Harvard Semitic Museum. From 1974 to 1987 he was the museum's director. He held his other positions until 1992, when he was made Professor Emeritus.

Cross received the Percia Schimmel Prize in Archaeology from the Israel Museum and the William Foxwell Albright Award in Biblical Scholarship in 1980. In 1991 he was awarded the Medalla de Honor de la Universidad Complutense by the University of Madrid. He also received the Gratz College Centennial Award in 1998 and a Lifetime Award in Textual Studies from the National Foundation for Jewish Culture in 2004.

Cross died in 2012 and was survived by three daughters and six grandchildren.