Veterans Day is an American holiday honoring military veterans. It was envisioned by Raymond Weeks as an extension of "Armistice Day" and first celebrated in 1947 in Birmingham. Though Veterans Day is now recognized as a federal holiday and a state holiday in all states, Birmingham's celebration remains the nation's largest.

Veterans Day is largely intended to thank living veterans for their service, to acknowledge that their contributions to United States national security are appreciated, and to underscore the fact that all those who served - not only those who died - have sacrificed and done their duty. Like its predecessors, "Armistice Day" or "Remembrance Day" in other parts of the world, Veterans Day falls on November 11, the anniversary of the signing of the Armistice that ended World War I. (Major hostilities of World War I were formally ended at the 11th hour of the 11th day of the 11th month of 1918 with the German signing of the Armistice.) 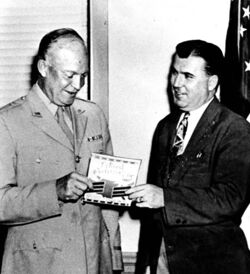 Weeks meeting with Gen. Eisebhower in 1947

"Armistice Day" was first commemorated in the United States by President Woodrow Wilson in 1919, and 30 states made it a legal holiday. On November 11, 1921 the remains of an unknown soldier were entombed in Washington D.C. as a memorial to all who died in service to the United States. Congress passed a resolution in 1926 inviting all States to observe the day, and then passed another resolution in 1939 making it a federal holiday.

Raymond Weeks, a World War II veteran and Birmingham citizen, led efforts to expand Armistice Day to salute the veterans of that war. In 1947 he led a delegation that presented the idea to General Eisenhower, then the Army's Chief of Staff. With his blessing, plans were made for the first Veterans Day celebration, held on November 11, 1947 in Birmingham. A parade was held downtown, beginning a tradition which continues with what remains the nation's largest Veterans Day Parade. The non-profit National Veterans Day in Birmingham was created to coordinate events in the city.

After years of lobbying, a bill to formally change the name of the federal holiday was introduced by Representative Edwin Rees of Kansas. It was signed by then President Eisenhower on June 1, 1954.

The celebration was moved to the fourth Monday of October by the Uniform Monday Holiday Act in 1968 (the law also moved George Washington's Birthday, Memorial Day, and Columbus Day). After protests by veterans groups, it was moved back to November 11 in 1978 (most states had reverted to the original date during the 1970s). Even though it is a federal and state holiday, it is formally observed in most parts of the United States mainly by government offices and banks. Many schools and businesses remain open on regular schedules. 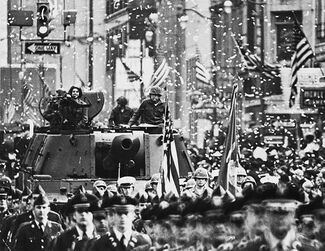 Birmingham's National Veterans Day Parade is held annually in the heart of downtown. The route follows 19th Street from 8th Avenue to 5th Avenue North, then east to 22nd Street and on down to 2nd Avenue North. From there it proceeds west to 18th Street and back north to 6th Avenue North. (route map)

In November 2020 the parade was not held due to the 2020 Coronavirus pandemic, with the National Veterans Day organization instead hosting a "virtual event" to honor veterans on its website.