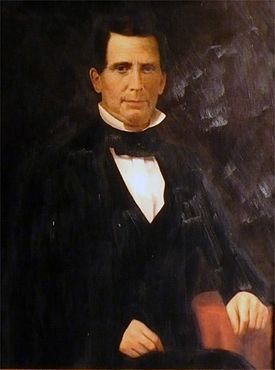 James Robert Powell (born December 7, 1814 in Powellton, Brunswick County, Virginia; died December 10, 1883 in Mississippi) was the first President of the Elyton Land Company and earned the nickname Duke of Birmingham for his bold, unwavering faith in the future of the city and his tireless promotion on its behalf.

Powell, a teacher in Virginia, first came to Alabama alone on horseback in 1833, stopping first in Montgomery, and then into Lowndes County, where he took employment on the mail route. He advanced to driving the mail by stagecoach and operated his own line. His stage line competed with another line managed by Robert Jemison Jr of Tuscaloosa. After years of fierce competition, the rivals merged into the Jemison, Powell, Ficklen & Company, earning a sizable fortune.

Having settled in Wetumpka in 1836, Powell served numerous terms as Sheriff of Coosa County. He ran successfully to the Alabama Senate in 1853 and 1855, after which he continued to reside in Montgomery, marrying the former Mary J. Smythe of Virginia in 1858. His daughter, also named Mary, was born in 1860.

During the Civil War Powell remained in the city rather than raising a regiment. He supported the Confederacy, notably by acts of charity to those who had sacrificed for the cause. He led an effort to provide a horse to the orator William L. Yancey, who had made unsuccessful attempts at personal expense to solicit aid from England. He also harvested a supply of ice from the Alabama River during the freak freeze in the winter of 1863, donating the valuable commodity to the use of the Confederate Army Hospital Department.

Also during the war, Powell increased his land holdings with a plantation on the Yazoo River in Mississippi, hiring John C. Calhoun, grandson of the statesman, to manage the operations. Powell recruited many experienced former slaves immediately after the war in order to increase productivity on his land -- a practice that earned enmity from others of the planter class who could not compete against him to keep their best hands.

Powell's wife and daughter left the United States after the war and spent several years in Europe. When they returned to America, they lived together in Baltimore and New York.

At the initial formation of the Elyton Land Company, created to build a great industrial city at the crossing of the Alabama and Chattanooga and South and North Railroads in Jefferson County, Powell invested 360 shares and was elected in 1871 to serve as the company's first president.

His major task as developer was to see the construction of a water works. Along with the other officers, Powell raised $200,000 in capital, platted streets, divided and sold lots, founded utilities and promoted the idea of a new southern industrial city through the national press. At the death of Robert Henley he ran for Mayor of Birmingham and defeated three opponents by a narrow margin. He directed the laying out of streets and squares, a task given to engineer William Barker. He designated plots to be donated for parks, schools and churches. He donated his own salary as Mayor to the schools and worked tirelessly to promote the mineral wealth of the region and the advantages which the company was prepared to offer to industrial firms who came to Birmingham to make use of it. He recruited Charles Linn to establish a bank in the city.

In 1873, during a national recession that drained away prospects for industrial development, and during an cholera epidemic that decimated the city's populace he remained in the city, insuring care for the sick and order on the streets. He also used that year to plan and carry out his grandest stunts on behalf of the city.

He campaigned to the utmost in order to stack the vote which moved Jefferson County's seat from Elyton to Birmingham. He invited the Alabama Press Association to meet in the city, and, elected an honorary member of the group, moved that Birmingham host the next convention as well, and that the New York State Press Association be invited to join the proceedings. Though opposed strongly, the motions passed. A year later, at a nadir for the city's development, the New York press were conducted to the great outcroppings of iron ore, coal and limestone. He spoke with conviction about Birmingham's certain future as an industrial giant, and thereby sparked breathless reports, published across the globe, proclaiming that, in the words of one reporter, "The fact is plain. Alabama is to be the iron manufacturing center of the habitable globe."

In 1874 Powell, shortly after his re-election as company president, handed the reigns to Henry M. Caldwell in order to attend to family matters in Europe. Soon later he retired to his Yazoo River plantation. At the invitation of leading citizens, he returned to Birmingham to campaign in the Mayoral race of 1878, but was defeated by railroad mechanic Thomas Jeffers. Powell had run his campaign imperiously, giving Jeffers every appearance of a condescending aristocrat -- an easy target for Jeffers, who appealed to the working man. Powell contested the results, but was unsuccessful and he returned bitterly to Mississippi. He died in December of 1883, shot by a teenager at a tavern.

Birmingham's first school building, the 1887 Powell School, is named for him.