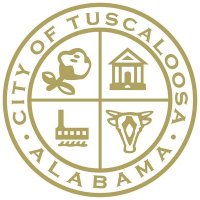 Tuscaloosa, located at the falls of the Black Warrior River in west central Alabama, is the the fifth-largest city in Alabama with a population of 90,468, and the seat of Tuscaloosa County. It is named for the Choctaw chieftain Tascaluza (meaning Black Warrior), who battled and was defeated by Hernando de Soto in 1540 in the Battle of Mauvila.

Best known as the home of the University of Alabama, Tuscaloosa is also the center of industry, commerce, healthcare, and education for the region commonly known as West Alabama. 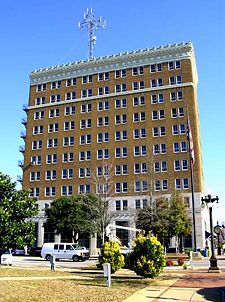 The area at the fall line of what would be later known as the Black Warrior River had long been well known to the various Indian tribes whose shifting fortunes brought them to West Alabama. The river shoals at Tuscaloosa represented the southernmost site on the river which could be forded under most conditions. Inevitably, a network of Indian trails converged upon the place, the same network which, in the first years of the 19th Century began to lead a few white frontiersmen to the area.

The pace of white settlement increased greatly after the War of 1812, and a small assortment of log cabins soon arose near the large Creek village at the fall line of the river, which the settlers named in honor of the legendary Tascaluza. In 1817, Alabama became a territory, and on December 13, 1819, the territorial legislature incorporated the town of Tuscaloosa, exactly one day before the United States Congress admitted Alabama to the Union as a state.

From 1826 to 1846 Tuscaloosa was the capital of Alabama. During this period, in 1831, the University of Alabama was established. The town's population and economy grew rapidly until the departure of the capital to Montgomery caused a rapid decline in population. Establishment of the Bryce State Hospital for the Insane in Tuscaloosa in the 1850s helped restore the city's fortunes. During the Civil War following Alabama's secession from the Union, several thousand men from Tuscaloosa fought in the Confederate armies. During the last weeks of the War, a brigade of Union troops raiding the city burned the campus of the University of Alabama. Tuscaloosa, too, suffered much damage from the battle and shared fully in the South's economic sufferings which followed the defeat.

The construction of a system of locks and dams on the Black Warrior River by the U.S. Army Corps of Engineers in the 1890s opened up an inexpensive link to the Gulf seaport of Mobile, stimulating especially the mining and metallurgical industries of the region. By the advent of the 20th Century, the growth of the University of Alabama and the mental health-care facilities in the city, along with strong national economy fueled a steady growth in Tuscaloosa which continued unabated for 100 years. Manufacturing plants of large firms such as Michelin and JVC located in town during the latter half of the 20th Century. However, it was the announcement of the addition of the Mercedes-Benz US International assembly plant in 1993 that best personified the new era of economic prosperity for Tuscaloosa.

According to the U.S. Census Bureau, Tuscaloosa has a total area of 66.7 square miles. 56.2 mi² of it is land and 10.5 mi² of it (15.7%) is water. Most of water within the city limits is in Lake Tuscaloosa, which is entirely in the city limits, and the Black Warrior River.

Tuscaloosa lies approximately 60 miles southwest of Birmingham, at the fall line of the Black Warrior River on the boundary between the Appalachian Highland and the Gulf Coastal Plain approximately 120 miles upriver from its confluence with the Tombigbee River in Demopolis. Consequently, the geography of the area around Tuscaloosa is quite diverse, being hilly and forested to the northeast and low-lying and marshy to the southwest.

The area experiences a typical Southern subtropical climate with four distinct seasons. The Gulf of Mexico heavily influences the climate by supplying the region with warm, moist air. During the fall, winter and spring seasons, the interaction of this warm, moist air with cooler, drier air from the North along fronts create precipitation.

Notable exceptions occur during hurricane season where storms may move from due south to due north or even from east to west during land-falling hurricanes. The interaction between low- and high-pressure air masses is most pronounced during the severe weather seasons in the spring and fall. During the summer, the jet streams flows well to the north of the southeastern U.S., and most precipitation is consequently convectional, that is, caused by the warm surface heating the air above.

There were 31,381 households out of which 23.9% had children under the age of 18 living with them, 35.0% were married couples living together, 15.7% had a female householder with no husband present, and 46.0% were non-families. 35.2% of all households were made up of individuals and 9.3% had someone living alone who was 65 years of age or older. The average household size was 2.22 and the average family size was 2.93.

Tuscaloosa has a strong-mayor variant, mayor-council form of government, led by a mayor and a seven-member city council. The mayor is elected by the city at-large and serves four-year terms. Council members are elected to single-member districts every four years as well. Neither the mayor nor the members of the city council is term-limited. All elected offices are nonpartisan.

The mayor administers the day-to-day operations of the city, including overseeing the various city departments, over whom he has hiring and firing power. The mayor also acts as ambassador of the city. The mayor sits in city council meetings and has a tie-breaking vote. The current Mayor of Tuscaloosa is Walter Maddox, who was elected to office is September 2005. Prior to Maddox, Alvin A. DuPont had served as mayor for 24 years.

The city council is a legislative body that considers policy and passes law. The council also passes the budget for mayoral approval. Any resolution passed by the council is binding law. The majority of work in the council is done by committee, a usually consisting of a chairman, two other council members, and relevant non-voting city employees.

Tuscaloosa, as the largest county seat in western Alabama, serves a hub of state and federal government agencies. In addition to the customary offices associated with the county courthouse, namely two District Court Judges, six Circuit Court Judges, the District Attorney and the Public Defender, several Alabama state government agencies have regional offices in Tuscaloosa, such as the Alabama Department of Transportation and the Alabama State Troopers. Also, several federal agencies operate bureaus out of the Federal Courthouse in Tuscaloosa.

Tuscaloosa is located partially in both the 6th and 7th Congressional Districts, which are represented by Spencer Bachus and Artur Davis respectively. On the state level, the city is split among the 5th, 21st, and 24th Senate districts and 62nd, 63rd, and 70th House districts in the Alabama State Legislature.

Despite its image as a college town, Tuscaloosa boasts a diversified economy based on all sectors of manufacturing and service. 25% of the labor force in the Tuscaloosa Metropolitan Statistical area is employed by the federal, state, and local government agencies. 16.7% is employed in manufacturing; 16.4% in retail trade and transportation; 11.6% in finance, information, and private enterprise; 10.3% in mining and construction; and 9.2% in hospitality. Education and healthcare account for only 7.2% of the area workforce with the remainder employed in other services.

The city is home to the region's two largest malls, University Mall and McFarland Mall, as a well as large array of retail outlets and a 16-screen movie theater.

The University of Alabama is the dominant institution of higher learning. Enrolling approximately 24,000 students, UA has been a part of Tuscaloosa's identity since it opened its doors in 1831. Stillman College, which opened in 1875, is a historically Black liberal arts college which enrolls approximately 1,200 students. Additionally, Shelton State Community College, one of the largest in Alabama, is located in the city. The school enrolls 8,000 students from all backgrounds and income levels.

The Tuscaloosa City School System serves the city. It is overseen by the Board of Education, which is composed of eight members elected by district and a chairman is elected by a citywide vote. Operating with a $100 million budget, the system enrolls approximately 10,300 students. The system consists of 19 schools: 11 elementary schools, 3 middle schools, 3 high schools (Paul Bryant High School, Tuscaloosa Central High School, and Northridge High School), and 2 specialty schools (the Tuscaloosa Center for Technology and Oak Hill School for special needs students). In 2002, the system spent $6,313 per pupil, the 19th highest amount of the 120 school systems in the state. 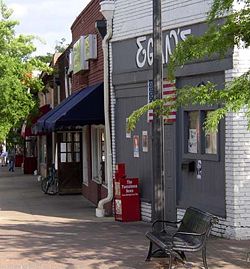 Tuscaloosa is home to a variety of cultural sites and events reflective of its historical and modern role in Alabama and the Southeast in general. Many of these cultural events are sponsored by the University of Alabama. Numerous performing arts groups and facilities, historical sites, and museums dedicated to subjects as varying as American art and collegiate football dot the city. During football season the area known as "The Strip" pulsates with students, alumni, locals and visitors.

The Tuscaloosa Public Library is a city/county agency with nearly 200,000 items on catalog. 46,857 registered patrons use the library on a regular basis — roughly 28 % of the population of the county. There are currently with three branches: the Main Branch on Jack Warner Parkway, the Weaver-Bolden Branch, and the Brown Branch in Taylorville.

Stillman College fields teams in football, basketball, and other sports. In the past decade, Stillman has gone through a renaissance of renovations, including a new football stadium.

Tuscaloosa is part of the Birmingham-Tuscaloosa-Anniston television market, which is the 40th largest in the nation. All major networks have a presence in the market. WBMA-LP is the ABC affiliate, WIAT-TV is the CBS affiliate, WBRC 6 is the Fox affiliate, WVTM-TV is the NBC affiliate, WBIQ 10 is the PBS affiliate, WTTO is the CW affiliate, and WABM is the MyNetworkTV affiliate. Additionally, WVUA-CA, an independent station, is operated by the University of Alabama.

The Tuscaloosa News is the major daily newspaper serving the city. Alternative newspapers include The Planet Weekly, City Magazine, Tuscaloosa Business Ink, and The Crimson White.

The Tuscaloosa Regional Airport, is located on the north side of the Black Warrior River west of downtown Northport.

Amtrak's Crescent route connects the Tuscaloosa Amtrak Station by rail to major cities along the east coast from New York to New Orleans. The Amtrak station is situated at 2105 Greensboro Avenue.

Barge traffic routinely transports goods along the Black Warrior River from Birmingham and Tuscaloosa to the Alabama State Docks at Mobile, on the coast of the Gulf of Mexico. Via the Tennessee-Tombigbee Waterway, the city is connected to the Ohio River valley.