Mercedes-Benz US International (MBUSI) is the Tuscaloosa based manufacturing center for Mercedes-Benz M-Class, R-Class and GL-Class sports utility and crossover vehicles. The factory and visitors' center are located at 1 Mercedes Drive at the Vance exit off I-59 in Tuscaloosa County.

The factory site itself is located in "Foreign Trade Zone 98, Subzone 98A", allowing for deferred collection of certain import duties, but falls under regular federal, state and county jurisdiction for all matters not related to import and export duties. Tuscaloosa County services the site, and the access roads around it have been annexed into the city of Tuscaloosa. MBUSI is the state's largest exporter, with $1 billion worth of products shipping out of the United States each year. 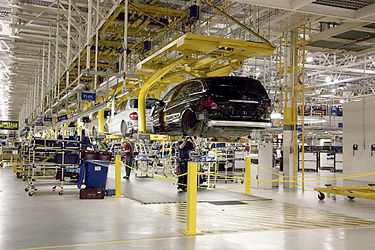 The factory, the first Mercedes manufacturing site outside of Germany, was the object of a 30-state site-selection battle beginning in April 1993. Alabama's aggressive $253 million package of incentives, approved by then-Governor Jim Folsom, Jr, was roundly criticized as "selling out" to corporate interests. In addition to the financial and worker-training incentives, Folsom and the state's industrial recruiters effected the removal of a Confederate flag from the grounds of the state Capitol, added "Willkommen" to certain highway signs, and erected a large Mercedes-Benz "tristar" logo over the scoreboard at Legion Field. The 940-acre site near Vance was selected at the end of that September. Those recruiting efforts and incentives have since been seen as a success in opening the door to a thriving automotive manufacturing sector in the state. In 2010 it was estimated that Mercedes-Benz was responsible for 22,000 direct and indirect jobs created in the region, with an economic impact of $1.5 billion.

Operating then as DaimlerChrysler AG, the plant was incorporated in 1995. The $300 million, 3.77 million square-foot facility was designed by ___, and built by B. L. Harbert International. Construction was completed in July 1996, with production beginning in January 1997. New employees trained for more than six months, mainly in Germany, before the plant began production.

The first CEO was Andreas Renschler, who was promoted to Head of Global Executive Management Development in 1999 and succeeded by Bill Taylor. Ola Källenius succeeded Taylor after his resignation in June 2009, and was succeeded himself by Markus Schaefer in 2010. Michael Göbel replaced Jason Hoff as CEO in 2019. 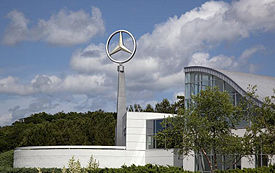 The Alabama-built M-Class made its public debut in the 1997 feature film "Jurassic Park", where it was outfitted as the primary fleet vehicle for the fictional dinosaur park. Demand for the car led to an $80 million expansion of the manufacturing plant in 1998–99, increasing annual production from 65,000 to 80,000. A second assembly line in Graz, Austria began producing M-Class vehicles for the European market in 1999. Over 570,000 of the cars were built (370 per day in two shifts) before the second-generation M-Class began production in 2004.

That same year construction of a second $600 million plant (announced in 2000) was completed, allowing MBUSI to resume sole production of the M-Class, as well as to begin production of the first Alabama-built R-Class vehicles. The GL-Class joined the plant's line-up in 2006. Diesel versions of all three models began production at MBUSI in 2008, and American production of the C-Class sedan is set to start in 2014. Engines and transmissions are assembled in Germany, flown to Huntsville or Birmingham-Shuttlesworth International Airport, and delivered by train via the CSX Central Alabama Intermodal Facility in Bessemer. Most other components are sourced in North America. A number of suppliers to Mercedes-Benz have opened factories along the I-59/20 corridor. The importance of close-by locations is increased due to the company's use of "just-in-time" delivery methods, minimizing the warehousing of parts and assemblies at the plant site to what is needed in a 2-3 hour span of assembly time.

In 2015 the company announced a $1.3 billion expansion with technology and equipment upgrades and a new body shop and SUV assembly shop in preparation for production of the next generation of Mercedes-Benz SUVs. The expanded plant is expected to employ 3,800 full-time workers. The plant design was commissioned from Barge Waggoner Sumner & Cannon. B. L. Harbert and Gray Construction formed a joint venture for construction, which is set to be completed in 2017. The project was incentivized by $80 million in sales and property tax abatements over 20 years.

Factory tours are available to the public through the Mercedes-Benz Visitor Center, adjoining the plant. A road test track, also on the site property, provides test-drivers with simulated road, terrain and hazard conditions.

Portions of the plant were damaged during the April 27, 2011 tornado outbreak.

The 2002 and 2012 versions of the "Popemobile" used by the Vatican for public processions, were converted from M-class vehicles built in Alabama.

Production was briefly suspended during the 2020 Coronavirus pandemic, with work resuming gradually beginning in early May. In 2021 the plant was expanded with a $53.5 million manufacturing logistics center

In 2022 Mercedes-Benz opened an electric vehicle battery plant in Woodstock, Bibb County. The batteries produced there, based on modules supplied by Envision AESC, are intended power the 2022 EQS and EQE SUVs.