The present Bibb County was originally part of a sprawling Monroe County, designated by the Mississippi territorial legislature in 1815, which stretched into what is now central Alabama from the Mobile delta. In 1817 it became part of Montgomery County, which was ceded into the Alabama Territory by 1818. The northern section was split off as Cahawba County (named for the Cahaba River) on February 7 of that year. In 1820 it was renamed in honor of William Wyatt Bibb, the first Governor of Alabama, who had died in office the preceding summer. 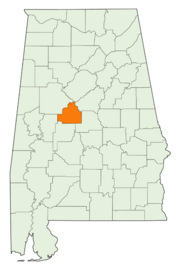