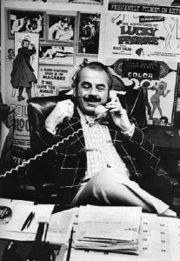 Friedman was the son of Birmingham News industrial editor Leon Friedman, and his wife, Margaret, a professional musician. The family home was at 2915 Juniper Avenue (now 10th Avenue South). Friedman spent a lot of time in a silent-movie theater owned by his uncle and was influenced early on by Tod Browning's Freaks, which he watched from the projectionist's booth even though it was restricted to adult audiences by the Birmingham Motion Picture Council.

He moved to Anniston after his parents divorced in 1933. His mother married chemical engineer Jack Masin. Leon Friedman died in Birmingham 1937. David, his mother, and stepfather moved to upstate New York before he finished high school. After graduating, he continued to work as a poster clerk in the film exchanges in Buffalo during the summers while he pursued studies at Cornell University.

Friedman started his film career as a projectionist, stagehand and film booker for Paramount Pictures before being drafted. He attended the U. S. Army film school as part of the Signal Corps during World War II and was sent back to Anniston, stationed at Fort McClellan. Following the war, he sold some army surplus searchlights to exploitation pioneer Kroger Babb who was raking in the box office from his 1945 underground sideshow spectacle "Mom and Dad", the first cinematic presentation of human birth.

Impressed by the commercial potential of exploitation film, Friedman partnered with Babb at Modern Film Distributors in Chicago in 1956. They collaborated on the Ingmar Bergman film "Monika". After Babb was bought out a few years later, Friedman met Herchell Lewis, who financed "The Prime Time" and Harvey Korman's debut, "Living Venus".

A conversation with legendary Toledo burlesque artist Rose La Rose led to Friedman and Lewis' first "nutie cutie" film, "The Adventures of Lucky Pierre" which was basically a series of five unconnected and unexplained shorts featuring scantily glad girls running around. The genre was a huge commercial success in the 1960s, with over 900 films released in the decade. Most of these were set in nudist camps following a ruling by the New York State Film Censorship Board. 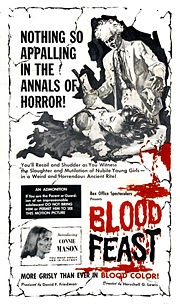 Friedman and Walker broke the mold, though, with the introduction of gory exploitation films in 1963. The first of these was "Blood Feast", drawn directly from the imagery of pulp magazines. As Lewis said of the movie's position in American cinema, "Blood Feast is like a Walt Whitman poem. It's no good but it's the first of its kind, therefore it deserves recognition." They followed that hit with 2000 Maniacs, the story of a small Southern town destroyed by Union soldiers in 1864 that comes back to life 100 years later (a la Brigadoon). The promotion for these gore movies was based on the "roadshow" techniques pioneered by Kroger Babb - he'd make deals directly with individual theater owners and hire stunt performers and poster-hangers to generate buzz before the screening. The emergence of national chain multiplexes systematized the way movies were financed and distributed, leaving niche pictures with fewer and fewer outlets.

Because of his emerging reputation, he was brought on as producer of the Canadian release Ilsa: She-Wolf of the SS, but used a pseudonym, Herman Traeger, in the credits following a disagreement with the film's backers.

Mau Mau Sex Sex, a documentary about Friedman and his business partner Don Sonney, son of another exploitation pioneer Louis Sonney, was released in 2001. Previous documentaries featuring Friedman include David Friedman: Portrait of an Exploiter (1997), and Sex and Buttered Popcorn (1989).

Friedman retired to Anniston in 1988 and owned and operated carnivals with Sonney that toured around the South. His wife Carol, who died in 2001, was also a Birmingham native.