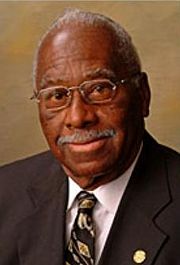 Demetrius C. Newton (born March 15, 1928 in Fairfield; died September 11, 2013) was speaker pro tempore of the Alabama House of Representatives, represented Alabama House District 53 and was a former city attorney for the city of Birmingham.

Newton graduated from Wilberforce University in Wilberforce, Ohio in 1949 and earned his juris doctorate at Boston University in 1952. He went on to serve in the 82nd Airborne Division of the U. S. Army from 1952 to 1954.

He was a managing partner in the firm of Newton & May and now practices alone, specializing in employer discrimination cases. He served as municipal judge for the city of Brownville from 1972 to 1978. He ran for an at-large seat on the Birmingham City Council in the 1977 Birmingham municipal election. His name appeared on 40% of ballots in the primary, leading all candidates, but he finished 7th in the run-off and failed to win one of the four open seats.

Newton was elected to the state legislature in 1986 served for six terms. He was elected by his colleagues as speaker pro tempore from 1998 to 2010.

Newton was appointed in 1991 by Mayor Richard Arrington to serve as city attorney, stepping down in 1999. He has also served as a member of the Tuskegee University board of trustees.

Newton was a deacon at Mt Olive Baptist Church. He was divorced and had two children, Deirdre and Demetrius Jr. He died in 2013 and was buried at Elmwood Cemetery.