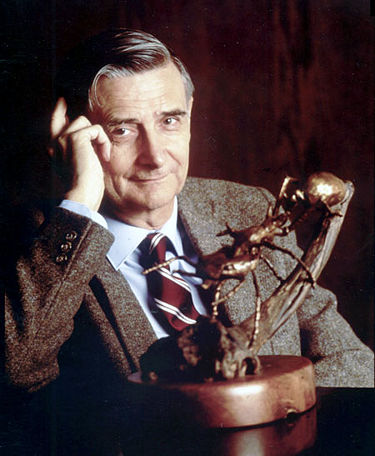 Edward Osborne Wilson, (born June 10, 1929 in Birmingham) is an entomologist and biologist known for his extensive research and writing on myrmecology (the study of ants), and for his writings on the relationships between ecology, evolution and sociological concepts. He is considered the founder of the field of sociobiology, having authored the seminal work Sociobiology: The New Synthesis in 1975. He is also a leading advocate for conserving biodiversity, a term that he has popularized.

Wilson was awarded the U. S. National Medal of Science in 1976, the Crafoord Prize in 1990, and is also a two-time winner of the Pulitzer Prize for General Non-Fiction. Time magazine named him one of the 25 most influential people in America in 1995.

Wilson was born to Edward and Inez Wilson of Birmingham. His parents divorced when he was seven, and he lived in several places as he grew up with his father and stepmother, Pearl. Most of his childhood was spent between the Washington D. C. area and the countryside near Mobile. From an early age he was interested in natural history.

While living in Paradise Beach, Florida, Wilson suffered a scratch to his eye from the fin of a pinfish he caught in the surf. The resulting cataract caused blindness in his right eye, and reduced his ability to watch mammals and birds. Instead he concentrated on insects. At the age of sixteen, intent on becoming an entomologist, he began by collecting flies, but the shortage of insect pins caused by World War II caused him to switch to ants, which could be stored in vials, and with the encouragement of Marion R. Smith, a myrmecologist from the National Museum of Natural History, he began a survey of all the ants of Alabama.

Wilson attended the Gulf Coast Military Academy in Biloxi, Mississippi from 1937 to 1941. He spent the next year at Mobile's Barton Academy and then went to Murphy High School. In 1944 the family moved to Brewton in Escambia County, and then to Decatur in Morgan County in 1945. After attending 14 schools over an 11-year span, he finally completed grade school at Decatur High School.

Wilson attempted to enlist in the US Army so that he would be able to attend college on the GI Bill, but his eye injury made him ineligible for service. Though his options were limited by tuition costs, he was able to attend the University of Alabama as an in-state student. He earned his bachelor's and master's degrees in biology there, and went on to complete a Ph.D. at Harvard University, where his dissertation was "A Monographic Revision of the Ant Genus Lasius." He served as a Junior Fellow at Harvard until joining the faculty there 1956. He took advantage of research grants to study tropical ants around the world and soon partnered with Robert MacArthur of Princeton in the development of a Theory of Island Biogeography, published in book form in 1967. That work has had an enduring importance in conservation management and planning.

Wilson has argued that the preservation of the gene, rather than the individual, is the focus of evolution (a theme explored in more detail and popularized by Richard Dawkins' The Selfish Gene).

Wilson inadvertently created one of the greatest scientific controversies of the late 20th century when he suggested that animal (and by extension human) behaviour can be studied using an evolutionary framework, a field of study which came to be known as sociobiology.

Some critics have accused Wilson of racism, and he was physically attacked for his views when a group of black African student poured water on his head. However, Wilson did not intend to apply a 'survival of the fittest' model on human society as had been true of so-called social Darwinists. The controversy caused a great deal of personal grief for Wilson; some of his colleagues at Harvard, such as Richard Lewontin and the late Stephen Jay Gould, were vehemently opposed to his ideas.

Wilson was surprised by attacks on his theory, much to the astonishment of his critics. He wrote that “the political objections forcefully made by the Sociobiology Study Group of Science for the People in particular took me by surprise.” Wilson had not considered his paper relevant to political analysis such as Marxist] offered. He was annoyed with his critics for “blind-siding” him. He objected that no one had made him aware of their feelings while he was writing his book, even though several of them, Gould and Lewontin included, were well aware of his project. Furthermore, he was angered because he felt that the critics were being hysterical and misrepresenting his position. He rejected the charge that his theory was biologically deterministic, and pointed to several passages in articles he had written which he claimed had already addressed their concerns, for example,

"The moment has come to stress that there is a dangerous trap in sociobiology, one which can be avoided only by constant vigilance. The trap is the naturalistic fallacy of ethics which uncritically concludes that what is, should be. The ‘what is’ in human nature is to a large extent the heritage of a Pleistocene hunter-gatherer existence. When any genetic bias is demonstrated, it cannot be used to justify a continuing practice in present and future societies." (New York Times Magazine)

A result of these controversies has been his work "Genes, Mind and Culture: The coevolutionary process" (1981) coauthored with Charles Lumsden. This very mathematical work has been popularized in "Promethean fire: reflections on the origin of mind" (1983). The paradigm of coevolutionary process takes its place in the history of modern science and anthropology.

Wilson has also studied the mass extinctions of the 20th century and their relationship to modern society. He explains:

Now when you cut a forest, an ancient forest in particular, you are not just removing a lot of big trees and a few birds fluttering around in the canopy. You are drastically imperiling a vast array of species within a few square miles of you. The number of these species may go to tens of thousands.

Many of them are still unknown to science, and science has not yet discovered the key role undoubtedly played in the maintenance of that ecosystem, as in the case of fungi] microorganisms, and many of the insects.

Let us get rid immediately of the notion that all you have to do is keep a little patch of the old growth somewhere, and then you can do whatever you want with the rest. That is a very dangerous and false notion.

Had people taken the alert signals seriously, as intelligent people must, this 1992 book [The Diversity of Life] would have set the basis for a new level of discussions on the environment and the current ongoing worldwide biotic holocaust exterminating species at the rate of one every 20 minutes. People might be working on solutions by now instead of still wallowing in ignorance. The facts are clearly and well laid out. The evidence is presented, the theories and data explained at length, at a reasonable cost in paperback (or free from the public lending library). Eight years later people are still presenting in public flawed paradigms (perhaps deliberately) to excuse their gluttonous behaviour which is crushing the planetary life-support systems.