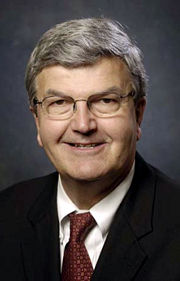 Edward E. Partidge (born c. 1948 in Demopolis, Marengo County) is a gynecologic oncologist, Chief Medical Officer of Guideway Care, former director of the O'Neal Comprehensive Cancer Center, and former president of the American Cancer Society. He has been recognized for his significant work toward reducing the disparity of cancer outcomes across racial, class and geographical divides.

Partridge graduated from Demopolis High School in 1965. He earned his undergraduate degree at the University of Alabama and his medical degree at the UAB School of Medicine in 1973. He completed his residency in obstetrics and gynecology at UAB Hospital under a fellowship sponsored by the American Cancer Society. He joined the faculty in 1976 as an instructor and rose to director of the Division of Gynecologic Oncology in 1990 and was named to the "Margaret Cameron Spain Chair in Obstetrics and Gynecology" in 1999.

Partridge later served as the "Evalina B. Spencer Chair of Oncology" at UAB and assumed the role of acting director of the Comprehensive Cancer Center after the resignation of Peter Emanuel in July 2006. He was made the permanent director in November 2007 and remained in that position until his retirement on June 30, 2017. While there he led efforts to improve patient care in the Black Belt through the Alabama Black Belt Cancer Linkage Initiative and was a principal investigator for the Deep South Network for Cancer Control.

Partridge's involvement with the American Cancer Society included a role in establishing the Joe Lee Griffin Hope Lodge. He was elected President of the National Board of Directors for the ACS in 2010, and served a one-year term. The new lobby at the O'Neal Comprehensive Cancer Center was named the "Barbara and Edward Partridge Atrium" in Spring 2019.

After retiring from UAB, Partridge was hired as Chief Medical Officer for Guideway Care.