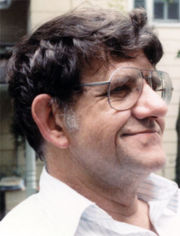 Emil Wolfgang Menzel, Jr (born April 16, 1929 in Champa, India; died April 7, 2012 in Birmingham) was a prominent primatologist and comparative psychologist, notable for his observations and research in nonverbal and gestural communication, the theory of mind, and behavioural economics.

Emil was the son of Emil and Ida Menzel, missionaries stationed to the India Mission of the Evangelical and Reformed Church. He attended the Mount Hermon School in Darjeeling before his family returned to the United States in 1941. He completed a bachelor of arts in English and philosophy at Elmhurst College in Elmhurst, Illinois and a master's in English at the University of Michigan in 1951.

Menzel earned the Combat Medical Badge during his two years of service as an Army sergeant in the Korean War. He married in 1954 and completed a Ph.D. in psychology at Vanderbilt University in 1958. After graduating, he conducted research with animals, primarily chimpanzees, with Harry Nissen and Richard Davenport at the Yerkes National Primate Research Center in Atlanta, Georgia.

Menzel's early research focused on how chimpanzees who were shown the locations of food and other stimuli in the natural environment would communicate that knowledge to others. He published two important papers based on that research in the journal Science in 1973 and 1975.

Using later observations by hidden camera, at the Tulane Primate Center in Covington, Louisiana, Menzel was able to show how chimpanzees coordinate their behavior and make use of improvised tools to accomplish collective goals (such as escape). He made further use of cameras and mirrors to study chimpanzee's spatial understanding with egocentric and allocentric cues. He later took advantage of computer-based testing apparatus to further study chimpanzee spatial cognition and navigation.

Menzel retired from Stony Brook University in New York in 1994 and settled in Birmingham when his mother-in-law moved into assisted living. He died from complications from lymphoma in 2012. He was survived by his wife, Harriet, and two children: Charles and Charlotte.