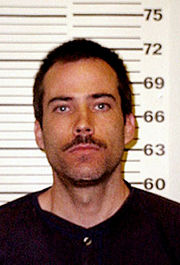 Eric Robert Rudolph (born September 19, 1966) is an American domestic terrorist who committed a series of bombings across the southern United States, which killed three people and injured at least 150 others. Rudolph declared that his bombings were part of a guerrilla campaign against abortion, what he describes as "the homosexual agenda," and perceived support for them from the United States government. He spent years as the FBI's most wanted criminal fugitive, but was eventually caught. In 2005 Rudolph plead guilty to numerous federal and state homicide charges and accepted five consecutive life sentences in exchange for his plea, avoiding a trial.

Rudolph was born on Merritt Island, Florida. His father Robert died in 1981, and Rudolph (then 15 years old) moved with his mother and siblings to Nantahala, in southwestern North Carolina. He attended ninth grade at the Nantahala School but dropped out after that year and worked as a carpenter with his older brother Daniel. His mother believed in survivalism and instilled this ideology in Rudolph.

After Rudolph received his GED, he attended Western Carolina University in Cullowhee for two semesters in 1985 and 1986. In August 1987, Rudolph enlisted in the U.S. Army, undergoing basic training at Fort Benning, Georgia. He was discharged in January 1989 while serving with the 101st Airborne Division at Fort Campbell, Kentucky, reportedly for smoking marijuana. In 1988, the year before his discharge, Rudolph had attended the Air Assault School at Fort Campbell. He never rose above the rank of Private E-1.

Rudolph committed the widely-seen Centennial Olympic Park bombing in Atlanta on July 27, 1996, during the 1996 Summer Olympics. The blast killed spectator Alice Hawthorne and wounded 111 others. Melih Uzunyol, a Turkish cameraman who ran to the scene following the blast, died of a heart attack. Rudolph's motive for the bombings, according to his April 13, 2005 statement, was political:

...the purpose of the attack on July 27 was to confound, anger and embarrass the Washington government in the eyes of the world for its abominable sanctioning of abortion on demand.

Richard Jewell, a Centennial Olympic Park security guard, initially hailed for spotting Rudolph's device and helping to clear the area, was an early suspect in the case. He had no involvement in the bombing and has been cleared.

Rudolph has also confessed to the bombings of an abortion clinic in the Atlanta suburb of Sandy Springs on January 16, 1997; a gay and lesbian nightclub, the Otherside Lounge, in Atlanta on February 21, 1997, injuring five, and the bombing of the New Woman All Women Clinic in Birmingham on January 29, 1998, killing officer Robert Sanderson and critically injuring nurse Emily Lyons. Rudolph's bombs were made of dynamite packed in nails, which acted as shrapnel.

It has been alleged that Rudolph is an adherent of the extremist group Christian Identity, a white supremacist sect that holds that white Christians are God's chosen people, and that others will be condemned to Hell. However, in a statement released after he entered a guilty plea, Rudolph denied being a supporter of that movement, claiming that his involvement amounted to a brief association with the daughter of a Christian Identity adherent. He also clearly named himself as a Catholic and said he hoped to stay one.

On May 5, 1998, he became the 454th Fugitive listed by the FBI on the Ten Most Wanted list. The FBI considered him to be armed and extremely dangerous, and offered a $1,000,000 reward for information leading directly to his arrest. He spent more than five years in the Appalachians as a fugitive, during which federal and amateur search teams scoured the area without success.

It is thought that Rudolph had the assistance of sympathizers while evading capture. Some in the area were vocal supporters of Rudolph. Two country music songs were written about him and a locally-produced t-shirt read: "Run Rudolph Run." Many Christian Identity adherents are outspoken in their support of Rudolph; the Anti-Defamation League, a Jewish civil rights group, notes that "extremist chatter on the Internet has praised Rudolph as 'a hero' and some followers of hate groups are calling for further acts of violence to be modeled after the bombings he is accused of committing."

The Rudolph family supported Eric and believed he was innocent of all charges, but found themselves under intense questioning and surveillance. On March 7, 1998, Daniel Rudolph, Eric's older brother, videotaped himself cutting off one of his own hands with a radial saw in order to, in his words, "send a message to the FBI and the media." The hand was successfully reattached by surgeons.

Rudolph was arrested in Murphy, North Carolina, on May 31, 2003, when a rookie police officer noticed someone scavenging for food in a garbage can behind a Sav-A-Lot store. At the time of his capture he was unarmed and did not resist arrest. He was clean shaven, with a trimmed mustache, and wearing new sneakers, indicating to some that he possibly spent some of his time on the run being harbored by supporters. Federal authorities charged him on October 14, 2003. Rudolph was defended by Richard S. Jaffe, who said he knew about his client's supposed beliefs but that Rudolph didn't have a problem with his Jewish faith.

On April 8, 2005, the U.S. Justice Department announced that Rudolph had agreed to plead guilty in all the attacks he was accused of executing, thus avoiding the death penalty. The deal was confirmed after the FBI found 250 pounds of dynamite he had hidden in the forests of North Carolina. His revelation of the dynamite was a condition of his plea agreement. He made his pleas in person in courts in Birmingham and Atlanta on April 13. He also released a statement in which he explained his actions and rationalized them as serving the cause of anti-abortion and anti-gay activism. He further claimed that he had "deprived the government of its goal of sentencing me to death," and that "the fact that I have entered an agreement with the government is purely a tactical choice on my part and in no way legitimates the moral authority of the government to judge this matter or impute my guilt."