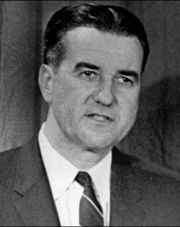 Frank Anthony Rose (born October 16, 1920 in in Meridian, Mississippi; died February 1, 1991 in Washington D.C.) was an educator, physician and the president of the University of Alabama from 1958 to 1969. It was during his term that the University admitted its first African-American students.

Rose's father died in 1930 and he worked plowing, picking cotton and delivering soft drinks to earn enough money to attend college. He completed a bachelor of arts in philosophy at Transylvania College in Kentucky and a bachelor of divinity at Lexington Theological Seminary, then pursued graduate studies at the University of London. He was ordained a minister in the Disciples of Christ Church. In 1945 he returned to Transylvania College as a philosophy professor, and was named president of the college in 1951.

In 1958 Rose moved to Tuscaloosa to accept the presidency of the University of Alabama. During his 11-year tenure he worked to increase student enrollment and faculty appointments, and to increase the institution's financial endowment and operating budget. The school's academic status also improved under Rose, with larger graduate programs, more qualified faculty, and stricter admittance standards. He supported scholarly programs and recognitions for outstanding students. Despite those academic improvements, he was better appreciated for his fund-raising and public relations skills. He also supported the Crimson Tide football program and agreed with new head coach Paul "Bear" Bryant that success on the field went hand-in-hand with success in building character.

As newly-elected segregationist Governor George Wallace prepared to make his promised "Stand in the schoolhouse door" on campus, Rose concerned himself with his legacy. He pledged to "exercise all the leadership at my command to see that the great tradition and great honor of this university will be recognized in the future." Ultimately, his role was to negotiate behind the scenes with the Governor's office and the U.S. Justice Department to ensure that the public political stand did not interfere with peaceful integration of classrooms under Federal authority.

In 1969 Rose left Alabama and founded University Associates, a non-profit consulting agency in Washington D.C. which later merged with public affairs firm Cassidy & Associates. Rose remained with the combined firm as a senior consultant. Rose also served on the Board of Visitors for the U.S. Military Academy at West Point, chaired the Educational Advisory Committee of the Appalachian Regional Commission, was president of the Southern University Conference, and served on the Executive Committee of the Southern Regional Education Board. He was also a regional chairman of the March of Dimes.

Dr. Rose served in 1959 as a Delegate to the Atlantic Congress of NATO for the United States Committee. He was a member of the National Citizen's Committee on Public Television, and a member of the Advisory Panel for ROTC Affairs, U.S. Army.

Rose died in 1991 of complications from cancer and pneumonia. He was survived by his wife, Tommye, four children and eight grandchildren.