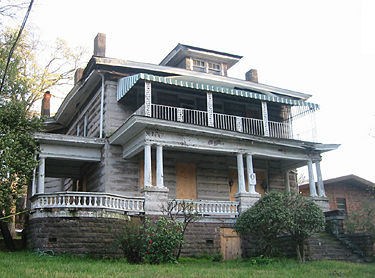 The George Harris residence in March 2004

The George Harris residence, also called the Harris-Green house is a large stone house located at 2731 Highland Avenue facing Rhodes Park. It was designed by architect Robert Posey and constructed in 1907 for George Harris, who had married one of the "three sisters" who came to live next door to each other with their respective husbands on this stretch of Highland.

The two-story rectangular house is raised on a rusticated brownstone basement. A broad run of steps leads to a deep porch supported on paired Tuscan columns which wraps around to the left side of the house enclosed by a low balustrade. The walls are clad in evenly-course bands of chip-face gray limestone. The deep eaves of the hipped roof are surmounted by brick chimneys in each corner. A hipped dormer crowns the front of the attic story. A green and white striped awning was added later, supported by an iron railing.

Until 2001 the house was owned by Ethel Green. It was sold, along with the adjacent Robert Warner residence to Bobby Keller, who originally intended to restore them as residences and to live in one of them. Keller did not make any visible progress toward restoration and the properties declined under his ownership, with boards covering the doors and windows.

In September 2007, just a week before they would have been placed on the Birmingham City Council agenda for condemnation, he hired a roofer to re-roof both houses and told city officials that he was hoping to restore them together as a bed and breakfast, pending neighborhood approval.