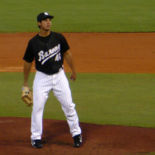 Giovany A. "Gio" Gonzalez (born September 19, 1985 in Hialeah, Florida) is a left-handed pitcher for the Washington Nationals. He was also a starter for the 2007 Birmingham Barons.

Gonzalez was drafted by the Chicago White Sox in the first round of the 2004 amateur draft out of Monsignor Edward Pace High School in Opa Locka, Florida. In 2005 he was traded to the Philadelphia Phillies. He was a Mid-Season All-Star for the AA Reading Phillies, and was returned to the Sox in another trade in December 2006.

Gonzalez is known for his 90-93 mph fastballs and "nasty" slider. Gonzalez went 9-7 with a 3.18 ERA for the Barons. His 185 strikeout total led all of minor league baseball, and his 13 strikeouts in 7 innings against the Huntsville Stars on April 27 was a career high. He was the sole Baron named to the 2007 Southern League All-Star Team.