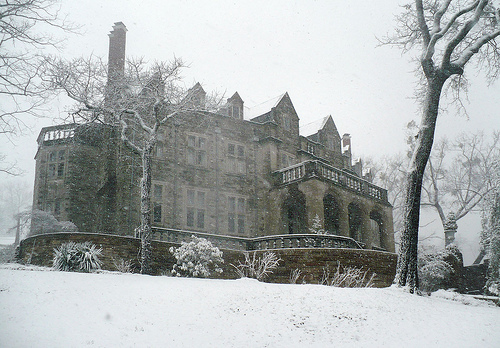 Hassinger Castle in the snow in March 2009

Hassinger Castle is a massive limestone mansion completed in 1929 at 2930 Carlisle Road at the intersection of Wellington Road in Birmingham's Redmont Park neighborhood. The house was designed by Hungarian-born architect Sigmund Nesselroth for the family of William and Virginia Hassinger, who moved there from a Victorian home at 2028 Highland Avenue.

The bulky but compact hilltop edifice was patterned after English country houses with which Hassinger was familiar. Its tall arched front terrace commands a view of an elliptical front garden while the house's symmetrical wings splay back at an angle. The exterior draws from both the English Tudor and Early English Renaissance styles and is faced with Indiana limestone. The gutters and conductors were cast from imported English lead.

Much of the interior was inspired by the mixture of styles evident at Hampton Court Palace in London. The living room is Jacobean while the dining room is Elizabethan. The interior paneling and cabinets were built of English oak, walnut and crotch-veneered birch, attached to the structure with hidden fasteners. Swedish forged iron was employed in the principal stairway and in other details.

Local sandstone was employed in the garden walls. A fish pond in the rose garden replicates one at Hestercombe Gardens in Somerset. A stone grotto arch features a bust of the Norse god Frey in the keystone.

The Hassinger family owned the home until it was sold to Mr & Mrs F. G. McConnell in the 1950s, though it had been vacant for several years when it sold, probably for less than $50,000. Prior to the sale, Hill Ferguson had been attempting to convince the family to donate the property to UAB for a vice-president's home or to the city of Birmingham for a children's museum to no avail. Later the home was bought by Carey and Doris Phillips. After her husband died, Doris married Bill Wayman and remained in the house.

The house is currently owned by Elise Durbin and has been extensively restored.