From Bhamwiki
(Redirected from Hazel the Mummy)
Jump to: navigation, search 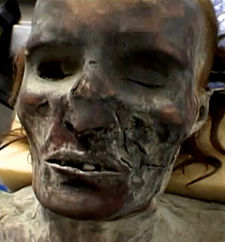 Hazel Farris (born c. 1880; died December 20, 1906 in Bessemer) was a rumored murderer, a possible suicide, and, after her death, a celebrated "mummy". As Hazel the Mummy, her desiccated remains were displayed in traveling carnivals and, later, at the Bessemer Hall of History. She was cremated shortly after a 2002 appearance on "The Mummy Road Show" on the National Geographic Channel.

University of Alabama folklorist Elaine Katz pieced together a comprehensive composite narrative from various accounts of Farris' life and death:

Hazel, an orphan, became a young beautiful housewife, in Louisville, Kentucky. She and her husband argued over her habit of spending too much money. Over breakfast on August 6, 1905 she announced her intention to purchase a new hat, provoking her husband to blows. During the ensuing struggle she got hold of a revolver and fatally shot her husband. As it happened, three police officers were in the vicinity, walking back to their station. They ran to the house, finding her holding the gun over her husband's body. She turned and killed all three. A crowd gathered and a deputy Sheriff attempted to take her by surprise. He succeeded only in shooting off Hazel's ring finger before she returned a deadly shot. She fled down an alley, eluding pursuers, and, despite a $500 reward, managed to get as far as Bessemer, where she settled to begin a new life.

Accounts differ as to whether she passed herself off as a schoolmarm and drank on the sly, or whether she was more open in her wantonness, working as a madam. In either case, she continued using her married name in her adopted home, a rough town with a reputation for vice and violence. She confided in a suitor, possibly a police officer, who sold her out. As police advanced on December 20, 1906 she locked herself in her room. Rather than submit to arrest and trial, she drank a fatal cocktail of alcohol and poison.

Hazel's body was taken to a nearby furniture store, possibly Adams Vermillion Furniture, which sold coffins and functioned as an informal funeral parlor. Though most accounts refer to her as an orphan, one informant claimed that her father, partner in a 3rd Avenue furniture store, had taken Hazel's corpse and immediately notified her parents in Kentucky. The mother wrote back, asking that he not bury her as she would come to claim the body. She never did appear, due, it seems, to her father's not wanting anything to do with the matter and her lack of funds.

To her caretakers' surprise, Hazel's body did not decay in the usual manner. Instead the body dried to a taut-skinned skeletal 37-pound mummy. Because of her notoriety and the novelty of her preservation, the furniture dealer struck upon the idea of recouping his expenses by charging the curious a dime to see her, propped against a wall in the back of the store. He then sent the body by boxcar to his brother in Tuscaloosa, who exhibited her the same way in his store. A Captain Harvey Lee Boswell also exhibited the "mummy" before traveling showman Orlando Clayton Brooks purchased the body for $25 in May 1907 and, after seeking anyone in Louisville that might have a claim on the body, added her to his touring menagerie. 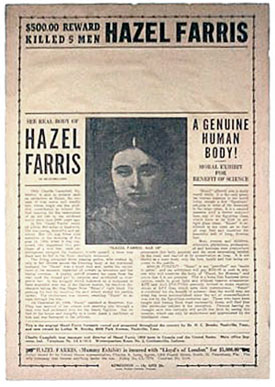 Hauled from town to town strapped to the sideboard of a Ford Model T, Hazel the Mummy reportedly grossed $150 to 200 per week for Brooks, even during the Great Depression, earning her a more luxurious ride in a 1931 Oldsmobile. Brooks continued to exhibit the mummy, in the open air, for 40 years. He printed handbills in which he claimed that the body was "exhibited for the benefit of science", and offered a $500 reward to anyone who could demonstrate that the body was not genuine. When rumors spread that rubbing the mummy's hand brought good luck, Brooks offered the opportunity to his patrons at an extra 25¢ charge. Shortly after World War II, Brooks and Hazel even toured Europe, where she was displayed before royal audiences.

The post-war economy did not favor traveling carnival exhibits and Brooks retired to Coushatta, Louisiana where he died, on April 1, 1950. A popular account has it that, in his will, Brooks left Hazel's mummy to his then 12-year-old great nephew, Luther, under certain conditions revealing a certain feeling of guilt for his crassly commercial treatment of her bodily remains. A note in Hazel's makeshift casket is supposed to have read: "This is Hazel. Take care of her because I haven't. I've shown her as a freak, and I realize now that is not what she is. She must be one of a kind, and she is yours. Never sell her or show her as a freak, and never bury her. I must pay for my crime and so must Hazel. If you ever show her, you must donate all the money to charity, for I did not." Luther Brooks' own account disputes any such restrictions. He kept her in the family garage in Nashville and later told the National Enquirer that, "I was the only kid in school who owned a mummy. It was like being a celebrity."

Luther exhibited Hazel the Mummy at school carnivals and, after graduating in 1958, added a few carnival rides to his touring act. He sold the rides in 1965 but kept the mummy, which he continued to exhibit at schools and churches. The body suffered additional slight injuries, including a broken nose, during this period. The money he raised by showing Hazel supported his family. Eventually his two daughters took to organizing exhibits and often combed her hair and spritzed her with perfume. Mortuary science students at Vanderbilt made annual examinations of the body and found arsenic in a tissue sample from the back of her arm. Eventually Brooks' family stopped promoting her, and let her rest.

In 1974 researchers connected to the Bessemer Hall of History tracked down the earthly remains of one of the city's most storied legends. They negotiated with the Brooks' to bring Hazel down for a special exhibition in a vacant downtown building that October. Thousands of people paid 50¢ a piece to file by her casket. After the museum opened in the basement of the Bessemer Public Library, Hazel was brought back for additional exhibitions. Louise Tommie used dry cleaning fluid to clean mold from the body during one of those visits. Hazel was also brought to the Alabama State Fair and to the University of Alabama's Ferguson Center in 1975. Her final appearances in Bessemer took place in October 1994 and 1995. Brooks offered to donate the mummy to the museum, but the offer was declined.

In later years, the corpse passed to the next generation, who were less enamored of the ghastly presence in their home and did not feel bound by their ancestor's wishes. In 2002 she was taken to the Pettus, Owen and Wood Funeral Home for cremation. Before the destruction of the mummy, she appeared on television as the focus of an episode of the National Geographic Channel series "The Mummy Road Show".

No primary documents or accounts were found by the show's producers to authenticate the story of Hazel's murderous exploits. X-ray, CT and endoscopic examinations performed for the show indicated that the body was infused with high levels of arsenic, which contributed to its preservation. Evidence of blood clots in her pulmonary veins suggest that Hazel may have died from pneumonia rather than from ingesting poison. It was surmised that the substance was used in a makeshift attempt at preservation using materials at hand. Arsenic may have been available in the Bessemer area due to its use in mining. The corpse was missing two fingers; one that appeared to have been shot off about a year before death, and the other detached post-mortem. The producers of the program concluded that it was more likely that Hazel's story was invented after the fact to explain the condition of the remains.