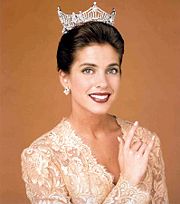 Heather Whitestone McCallum (born February 24, 1973 in Dothan) was the the 1995 Miss America, and the first disabled person to wear the crown.

At the age of 18 months, Whitestone suffered a high fever from the Haemophilus influenzae virus, as well as a likely meningitis. She was given a high dose of two antibiotics. The experience caused permanent damage to nerves in her ears and left her hearing greatly impaired. Her parents taught her to speak using the "Acoupedics" education system which makes use of the child's limited hearing to teach vocalization alongside lip-reading. This allowed her to function without a sign language interpreter in public school settings.

Whitestone began studying ballet at the Dothan School of Dance before moving to St Louis to attend the Central Institute of the Deaf. She returned to Northview High School in Dothan and was there when her parents divorced and she moved with her mother to Hoover. She spent one year at the Alabama School of Fine Arts and then graduated with a 3.6 GPA after her senior year at Berry High School. As a teenager she also won a statewide orienteering competition.

After high school, Whitestone attended Jacksonville State University and started competing on the pageant circuit. She was first runner-up in the 1992 and 1993 Miss Alabama pageants, and finally won in 1994. She also won the Miss America crown on September 17 of that year, dancing to Sandi Patti's Via Dolorosa and promoting her own motivational program, "STARS" (Success Through Action And Realization of your dreamS) during interviews.

During her year of service, Whitestone promoted STARS at hundreds of speaking engagements. She helped launch a program created by the Miss America organization to help diagnose early hearing loss and served on the Executive Board of the President's Committee on the Employment of People with Disabilities during the Clinton administration. Also in 1995, she joined the Board of the Helen Keller Foundation and was inducted into the American Academy of Achievement alongside Mike Wallace, Rosa Parks, Robert Schuller and Robin Williams. In 2002 she was named to the Advisory Council for the National Institute of Health on Deafness and Other Communication Disorders.

Her celebrity brought controversy from within the deaf community. Many deaf activists discourage attempts to teach deaf children to speak. Further controversy accompanied her decision in 2002 to undergo cochlear implant surgery, which partially restored her hearing.

In 1996 Whitestone made her professional debut as a dancer with the Alabama Ballet. She was also featured in the video for Alabama's hit song "How Do You Fall in Love". In recent years she has written several devotional books, detailing the way her faith in God has strengthened her. On June 8, 1996, Whitestone married John A. McCallum, then an aide to Georgia Congressman Newt Gingrich and currently Executive Director of the Technology Association of Georgia Foundation. They reside in Sea Island, Georgia and have four sons. She is currently running a direct-sales skin care products business, Esther Inc., which she founded with her husband and sister-in-law.