From Bhamwiki
(Redirected from Henry B. Walthall)
Jump to: navigation, search 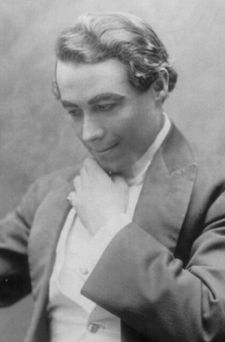 Henry Brazeale Walthall (born March 16, 1878 at Mallory Station in Shelby County; died June 17, 1936 in Monrovia, California) was a silent film actor, appearing in dozens of films between 1909 and 1936. He was best known for playing Colonel Ben Cameron in D. W. Griffith's epic The Birth of a Nation.

Walthall was born on a plantation, the second of eight children born to Junius Leigh Walthall and Anne Mallory Wallace Walthall. His middle name, Brazeale, came from his grandmother Eliza's Irish maiden name. Although his parents hoped he would become a scientific farmer or lawyer, Walthall discovered his talent for entertaining while still a child. He also became an excellent horseman, which would prove important in his career.

In 1898, at the beginning of the Spanish-American War, Walthall enlisted in the United States Army's First Alabama Regiment. He served eleven months, but a bout of malarial fever while in camp at Jacksonville, Florida kept him out of combat. After his discharge, he studied law at Howard College, mainly to please his parents. He disliked it, however, and dropped out after six months. In 1900, he left for New York City to become an actor.

Walthall began his career as a stage actor, appearing on Broadway in a supporting role in William Vaughn Moody's The Great Divide in 1906–1908. His career in movies began in 1908, in the film Rescued from an Eagle's Nest, which also featured another young actor named D. W. Griffith. As the industry grew in size and popularity, Griffith emerged as a director and Walthall found himself a mainstay of the Griffith company, frequently working alongside such Griffith regulars as Owen Moore, Kate Bruce, and Jack and Mary Pickford. He followed Griffith's departure from New York's Biograph to California's Reliance-Majestic Studios in 1913.

Given the relatively short length of films in the early years, Walthall frequently found himself cast in dozens of films each year. For those still unfamiliar with his face however, he gained national attention in 1915 for his role as Colonel Ben Cameron in Griffith's highly influential and controversial epic The Birth of a Nation. Walthall's portrayal of a Confederate veteran leading the Ku Klux Klan won him large-scale fame, and Walthall, nicknamed the "Little Colonel", was soon able to emerge as a leading actor in the years leading up to the 1920s, parting ways with Griffith.

He continued through the 1920s, appearing in The Plastic Age with Gilbert Roland and Clara Bow and a 1926 adaptation of The Scarlet Letter opposite Lillian Gish. Now in his 40s, he found his roles increasingly more of the "character" variety. Having experience as a stage actor, Walthall continued his career into the 1930s.

Walthall was married twice. His first marriage, to actress Isabel Fenton, ended in divorce after ten years in 1917. The two had no children. His second marriage, to actress Mary Charleson, lasted from the following year until his death from influenza in 1936. Henry and Mary had one child, a daughter named Patricia, in 1918.

Walthall is interred at the Hollywood Memorial Cemetery (Hollywood Forever) in Los Angeles. He has a star on the Hollywood Walk of Fame at 6201 Hollywood Boulevard.