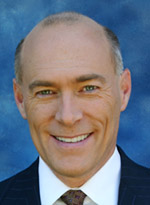 James Max Spann Jr (born June 6, 1955 in Huntsville) is a well-known meteorologist for ABC 33/40 and nine-time winner of The Associated Press' award for best weather anchor in Alabama.

Spann, the son of James and Carolyn Adkins Spann, was born in Huntsville, but grew up in Greenville in Butler County, where he attended school at W. O. Parmer Elementary. In 1966 the family moved to Tuscaloosa and he completed 5th grade at Verner Elementary before moving on to Eastwood Junior High School and Tuscaloosa High School. He graduated in 1974. While in high school, he served as an amateur radio volunteer, helping to transmit information during the 1973 Brent tornado and 1974 Superoutbreak. He also started working as a disc jockey at WTBC-AM in Tuscaloosa while studying electrical engineering at the University of Alabama.

Spann began working at Tuscaloosa's WCFT 33 in the summer 1978. That fall he moved to WSFA in Montgomery as a weekend sports anchor, occasionally filling in for Dan Atkinson in the weather department. He left that job to take an afternoon radio show at WHHY-FM.

After a few months he was invited to come to Birmingham to be the main weather anchor for WAPI (NBC 13). He started his new job at age 23 the same week that Hurricane Frederic entered Mobile Bay.

After 5 years at Channel 13, he was transferred to KDFW-4 in Dallas, Texas. There, he won the 1985 Katy Award for Best Weathercaster from the Dallas Press Club. In early 1986 Spann resigned to return to Alabama. He took over the operation of an AM/FM station in Demopolis.

In 1989, Spann returned to Birmingham to replace Mike Royer at WBRC-6. He also went back to school, earning a certificate in meteorology from Mississippi State University. That certificate enabled him to earn recognition by the American Meteorological Society and National Weather Association.

In 1996, after 7 years at WBRC marked by blanket coverage of the "Blizzard of '93", Spann switched over to the new ABC 33/40 (which combines the signals of WCFT and WJSU 40 out of Anniston). The move coincided with WBRC's purchase by News Corp., which converted the station into a FOX Network affiliate. Spann was given the opportunity to create ABC 33/40's weather standards from the ground up. He and his team pioneered numerous technologies and practices later copied by other stations. While other stations would return to regular programming, 33/40 stayed on the air during tornados and other especially severe weather events.

Spann's coverage of the 2001 Tuscaloosa tornado, featuring video of the twister taken by a camera mounted on the WCFT tower in Tuscaloosa, won an Emmy Award and an Edward R. Murrow Award. In 2005, Spann completed the requirements to become a "Certified Broadcast Meteorologist" from the American Meteorological Society. In 2012 he was named "Broadcaster of the Year" by National Weather Association.

He is also the chairman of Reality Radio, which once operated on Birmingham FM as WRRS-FM "Reality 101", and is now the parent of AllWorship.com.

Spann and his wife, the former Karen O'Mary, have two sons: James Paul and Ryan. He and his family are active members of Hunter Street Baptist Church, where he also teaches Sunday school.

On January 18, 2007, Spann wrote an opinion piece on his weather blog regarding the political controversy over the existence of global warming and mankind's culpability for and responsibility to reverse climate change. Spann was responding directly to comments made by Dr Heidi Cullen on The Weather Channel's website. Cullen, in calling for a distinction between scientific and political content in weather forecasts, wrote that "If a meteorologist can’t speak to the fundamental science of climate change, then maybe the AMS shouldn’t give them a Seal of Approval."1.

In responding to Cullen's piece, Spann stated that "I know dozens and dozens of broadcast meteorologists all over the country. [...]. I do not know of a single TV meteorologist who buys into the man-made global warming hype."2

His blog post was picked up by internet site "The Drudge Report" and disseminated worldwide, making Spann a representative spokesman for meteorologists who reject the theory of man-made global warming. Though the AMS does have an official position that "There is convincing evidence that since the industrial revolution, human activities, [...], have become a major agent of climate change." Spann's position is that individual meteorologists are qualified to draw their own conclusions from the available data and that divergent views should not be censored by the AMS.