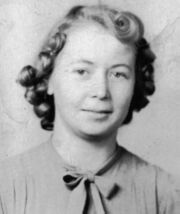 Jessie was raised on her family's farm in Moundville and earned a teaching certificate at Livingston State Teacher's College in 1937. She taught elementary school in York for a while before moving to Birmingham. She married Jimmie Hale, a reformed drunk, in 1943. Six months later they founded the Downtown Mission which is now known as the Jimmie Hale Mission.

Jimmie died in 1944 before the birth of his only daughter. Jessie moved in with a friend, but lost that refuge as well when the friend was badly injured in an automobile accident. She and her daughter were taken in by another young couple. Years later she married Joe Downs, a former client, with whom she had a second daughter. Within two and a half years Downs relapsed into addiction and left them. In 1964 Jessie underwent a successful emergency mastectomy at South Highland Hospital. Through all these disruptions she kept the Mission open, serving as executive director until she retired in 1990. Jessie's Place, the Mission's ministry to women and children, is named in her honor.

Downs died in her sleep in January 2010. She is buried at Oak Hill Cemetery.