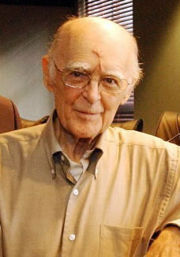 John Ritchie (born May 2, 1925 in New York; died September 15, 2013) was one of the founders of the city of Chelsea, having helped to incorporate the community in the mid-1990s and served on every Chelsea City Council until 2007.

Rithcie enlisted in the Army Air Corps soon after the bombing of Pearl Harbor. After World War II he went to West Point before joining the Air Force. He went on to serve in the Korean War and the Vietnam War.

After retiring from the U. S. Air Force's Air University in Montgomery in 1976, Ritchie and his wife Terry bought a 5-acre plot in Chelsea. He became a teacher at Chelsea High School and helped organize the community for incorporation. The couple had four children: Laura, John, Frank and Steve.

Ritchie resigned from the City Council in 2007 in order to spend more time at home. Tony Picklesimer was selected from six applicants to serve his unexpired term.

Ritchie died from injuries sustained in a vehicle collision on U.S. Highway 280 at Shelby County Highway 39. He was survived by his wife, four children, five grandchildren and four great-grandchildren.