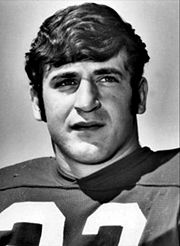 Johnny Musso (born March 6, 1950 in Birmingham) is a former football player and a partner in the Chicago Board of Trade firm Shatkin Arbor.

Musso, nicknamed "The Italian Stallion", was a star running back at Banks High School and for the University of Alabama. He was twice an All-American and a three-time All-Southeastern Conference player. He finished fourth in the voting for the 1971 Heisman Trophy and holds an Alabama team record for most rushes in a game; 42 in the 1970 Iron Bowl.

Musso was selected by Chicago in the NFL draft, but chose instead to play for the Canadian Football League's British Columbia Lions (1972 - 1974). In 1975 he returned to Birmingham as a member of the World Football League's Birmingham Vulcans. That fall he began a three-year NFL career with the Chicago Bears.

After retiring from football, Musso became an independent trader at the Chicago Board of Trade. In 1991 he joined the firm of of Shatkin Arbor. He and his wife, Tanner, have four sons and one daughter.

Musso was inducted into the Alabama Sports Hall of Fame in 1989, into the College Football Hall of Fame in 2000 and was awarded the 2007 Legend of Birmingham Award during the team luncheon for the Papa Johns.com Bowl at Legion Field.