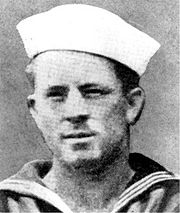 Osmond Kelly Ingram (August 4, 1887 in Oneonta; October 16, 1917 in the Celtic Sea, south of Waterford County, Ireland) was a sailor in the U.S. Navy and the first enlisted serviceman from the United States killed in World War I. He died heroically, saving his ship and shipmates by jettisoning the vessel's ammunition stores in advance of a torpedo strike.

Ingram was one of four sons born to Robert L. Ingram and his wife Naomi Elizabeth "Betty" Lea. He moved with his mother from Oneonta to Pratt City in 1903 just after he completed high school. He enlisted in the Navy on November 24 of that same year and served until 1908. He then joined the Birmingham Fire Department and spent four years as a fireman based at Birmingham Fire Station No. 18 in Pratt City. In 1912 he re-enlisted.

For a time, Ingram was treated at a Naval hospital for rheumatism and had been ordered discharged, but he begged his surgeon for a chance to fight. His commander on the USS Cassin arranged for him to return to duty as a Gunner’s Mate First Class after a short leave. While in the service he wrote a letter to his mother every week and enclosed $30 from his pay each month. He returned to Birmingham on May 1, 1917 and received a telegram the next day summoning him back to his ship for active duty.

The Cassin was attacked by a German U-61 submarine off the coast of Ireland on October 16, 1917. Ingram spotted the approaching torpedo, realized it would strike close by explosives, thus dooming the ship, and rushed to jettison the ammunition. He was blown overboard and lost when the torpedo struck.

For his sacrifice, Ingram was awarded the Medal of Honor and the Italian War Cross. The destroyer USS Osmond Ingram (DD-255) was named in his honor in 1919 and Birmingham's West Park was rededicated as Kelly Ingram Park in 1932. Birmingham's Kelly Ingram Post No. 668 of the Veterans of Foreign Wars of the U.S. was founded in the 1960s.

For extraordinary heroism in the presence of the enemy on the occasion of the torpedoing of the Cassin, on 15 October 1917. While the Cassin was searching for the submarine, Ingram sighted the torpedo coming, and realizing that it might strike the ship aft in the vicinity of the depth charges, ran aft with the intention of releasing the depth charges before the torpedo could reach the Cassin. The torpedo struck the ship before he could accomplish his purpose and Ingram was killed by the explosion. The depth charges exploded immediately afterward. His life was sacrificed in an attempt to save the ship and his shipmates, as the damage to the ship would have been much less if he had been able to release the depth charges.