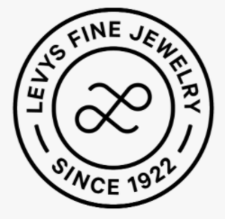 The company was founded by Joe Denaburg in 1922, shortly after he returned home from service in World War I. He borrowed $2,500 from his mother-in-law, Esther Levy, to open the store, which he named after her.

Levy's was originally a watch, clock and jewelry shop which also carried luggage and other items. During the Great Depression, it began functioning as a pawn broker, providing loans to customers in need. In 1960 the business had locations at 3001 27th Street North in North Birmingham and 1334 Tuscaloosa Avenue Southwest in West End.

In the 1980s Levy's began specializing in estate jewelry and fine antiques, with retail and wholesale sales as well as a jewelry repair service.

The shop is currently owned by Joe's son and daughter Charles and Rhoda Denaburg. Grandsons Todd Denaburg and Jared Nadler work there as managers.

In June 2009 the store celebrated its 87th anniversary by wrapping 100 pieces of jewelry (worth between $20 and $1000) and leaving them scattered across the city.