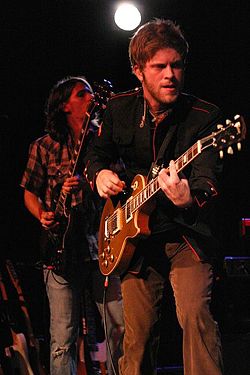 Matthew Mayfield (born April 9, 1983 in Birmingham) is a singer, guitarist, songwriter, and former frontman for Moses Mayfield. His musical career began with a football injury that left him laid up with a guitar and an endlessly-rewound cassette of Guns 'N Roses' "Use Your Illusion".

He formed his first group with Stewart Vann while a student at Birmingham-Southern College. He dropped out to pursue rock stardom and found some success with the group, but the rigors of touring led to a break up in 2008.

Mayfield began performing as a solo singer-songwriter before piecing together a new band, dubbed the Blue Cut Robbery for a 2010 release. The group includes Vann and former Moses Mayfield drummer Wil Drake. Two of his singles were used in episodes of "Grey's Anatomy". In 2011, Mayfield released his first full-length solo album, Now You're Free on his Sweet Exchange label.