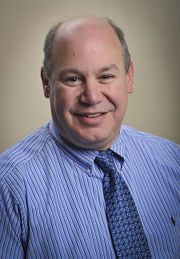 Michael S. Saag (born October 2, 1955 in Louisville, Kentucky) is a physician and prominent AIDS researcher, and Director of the Division of Infectious Diseases at UAB.

Saag graduated from Ballard High School in Louisville, where he starred on the Bruins offensive line in football. He completed an undergraduate degree in chemistry at Tulane University in 1977 and returned to the Louisville for his medical degree. He then completed his residency and a research fellowship in infectious diseases at UAB. As a researcher, he is credited with performing pioneering clinical trials for several antiretroviral drugs now in common use for HIV treatment and for first demonstrating the clinical value of "viral-load testing" in HIV/AIDS treatment. His proposal for a comprehensive treatment and research center for AIDS patients was realized with the opening of UAB's pioneering 1917 Clinic in 1988.

As holder of the Jim Straley chair, Saag is director of the William C. Gorgas Center for Geographic Medicine and the UAB Center for AIDS Research. He is a frequent lecturer at AIDS conferences around the world and, in 2009, was elected chairman of the HIV Medicine Association of the Infectious Diseases Society of America. In 2005 he received a Live the Dream Award from the Birmingham Regional Chamber of Commerce.

In March 2020 Saag and his family visited New York City just as the city was beginning to implement measures to inhibit the spread of the SARS-CoV-2 coronavirus. Saag practiced recommended hygiene and social distancing during the trip, but began showing symptoms before he returned to Birmingham. He isolated himself immediately. Because of his experience with the benefits of people affected coming forward during the AIDS crisis, Saag began speaking out by videoconferencing as soon as testing confirmed that he was infected with COVID-19. He reported mild symptoms and urged the public to take seriously calls for social distancing and isolation to "flatten the curve" of the disease's spread.