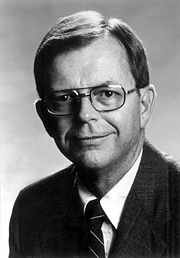 Neal Richard Berte is the chancellor and was president from 1976 until 2004 of Birmingham-Southern College.

Berte was born in Cincinnati, Ohio and earned his bachelor's, master's, and doctoral degrees from the University of Cincinnati, with a research interest in the use of "learning contracts" in higher education. He published a much-cited book on the subject in 1975.

After serving as assistant director of the College Entrance Examination Board and assistant to the president at Ottawa University in Ottawa, Kansas, Berte came to Alabama in 1970 to accept the position of Dean of the New College at the University of Alabama. After four years there, he took on the role of Vice President for Education Development for the University. On February 1, 1976 he was sworn in as the 11th president of Birmingham-Southern College.

As college President, Berte was known for his incredible ability to recognize and connect with any of the thousands of students passing through the halls. He was very visible, not only on-campus, but at sporting events and service projects wherever they took place. At the same time he was a committed ambassador and fund-raiser, helping secure the college's endowment and reputation. The Council for Advancement and Support of Education named him one of the nation's 100 Most Effective College Presidents and the American Council on Education recognized him as the Administrator of the Year for Alabama. He served as the first president of the Alabama Association of Colleges and Universities and as president of the American Association of Higher Education.

He took over the presidency at a time of uncertainty, and through his wise, caring and energetic leadership led the college into its present status as one of the premier liberal arts colleges in the United States. Among the characteristics he specifically emphasized during the growth of the school was its commitment to service as well as learning.

The Birmingham City Council inducted Berte into its Birmingham Gallery of Distinguished Citizens and as Birmingham Citizen of the Year in 1992. He was also presented with the Erskine Ramsay Award for Outstanding Civic Service. The Birmingham News and Birmingham Post-Herald each named him one of their top 10 local leaders. He was inducted into the Birmingham Business Hall of Fame in 2001.

Berte and his wife, Anne are active members of Canterbury United Methodist Church. They have four children: Becky, Julie, Mark and Scott, and eleven grandchildren.