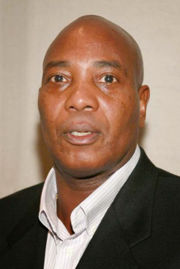 Ozzie Newsome Jr. (born March 16, 1956 in Muscle Shoals) is the general manager of the NFL's Baltimore Ravens and a member of the Pro Football Hall of Fame for his accomplishments as a star tight end for the Cleveland Browns.

Newsome played receiver and defensive end at Colbert County High School and accepted a scholarship offer to play for Paul "Bear" Bryant at the University of Alabama. Nicknamed "The Wizard of Oz,", Newsome started for all 4 years of his college career as a receiver. As a freshman he had 20 receptions for 374 yards with one touchdown. His second year he had 21 receptions and 5 touchdowns. He surpassed that with a 25-catch, 529-yard season in 1976 and capped his career with 36 receptions for 804 yards and 4 touchdowns in 1977. 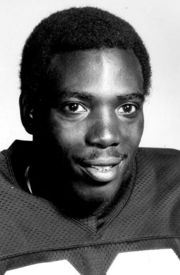 He was named to the College Football All-America Team in his senior year. In total, Newsome amassed 102 receptions for 2,070 receiving yards and 16 touchdowns, helping the Alabama Crimson Tide football team to a 42-6 overall record during those years. His 20.3 average yards per catch stood as a Southeastern Conference record for over 20 years.

Bryant called him "the greatest end in Alabama history and that includes Don Hutson. A total team player, fine blocker, outstanding leader, great receiver with concentration, speed, hands." Hewas named the Alabama Player of the Decade for the 1970s. He was a two-time All-SEC player (in 1976 and 1977), and named SEC Lineman of the Year in 1977 by the Birmingham Quarterback Club and the Atlanta Touchdown Club.

Newsome was the 23rd pick in the 1978 NFL Draft for the Cleveland Browns. He was named the Browns' Offensive Player of the Year his rookie year, the first time in 25 years that a rookie had received that honor. Newsome went to the Pro Bowl in 1981, 1984 and 1985. In 1984, Newsome set a franchise record for receiving yards in a game (191) that still stands to this day. In 1986, Newsome won the Ed Block Courage Award for playing with injuries, and in 1990 won the "Whizzer" White NFL Man of the Year Award for his community service. 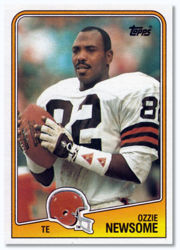 Newsome did not miss a game in his 13-year NFL career, playing in 198 consecutive games as a Brown with 191 starts. He finished his career with 662 receptions and 7,980 yards, both Cleveland franchise records, and 47 touchdowns, fourth all-time.