This article is about 2011 yogurt and waffle shop. For other uses, see Paramount (disambiguation).

Paramount was a frozen yogurt and dessert shop located at 200 20th Street North in the Roden Block on the northwest corner of 20th Street and 2nd Avenue North from July 28, 2011 to April 2013. The shop featured self-serve frozen yogurt as well as fresh-made Belgian waffles and cupcakes. The owners were Kent and Angie Ingram and the manager was their son, Russell Ingram. 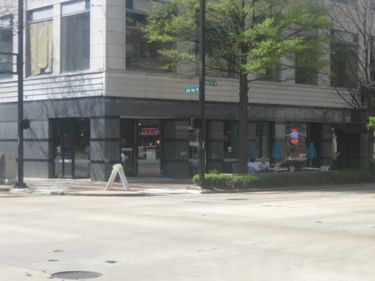 The Ingrams purchased the Roden Block in 2007 and moved their law practice into the building's second floor in 2009. In 2010, they hired architect Jeremy Erdreich to design the exterior renovation. The renovations were approved by the Birmingham Design Review Committee in January 2011.

The dessert shop was named for the Paramount Cigar & Candy Company, which had opened in the space in 1933 as the Paramount Cigar & Soda Company. Joseph McClure of Joseph McClure Commercial Real Estate was the developer, Lisa Sheppard of LCS Designs provided the interior design, and Barri Thompson of Atmosphere Home Essentials was the interior decorator. The opening was originally planned to be July 15, 2011, exactly 78 years after the formation of the original Paramount Company, but wound up being delayed two weeks.

The shop featured 12 flavors of frozen yogurt each day from a rotating selection and also offered two flavors each of cupcakes and Belgian waffles each day. After approval of its liquor license in December 2011, it began offering a limited selection of wine and beer. Also providing outdoor seating and wi-fi access, the shop was billed as "an urban gathering place."