From Bhamwiki
(Redirected from Pete's Famous)
Jump to: navigation, search 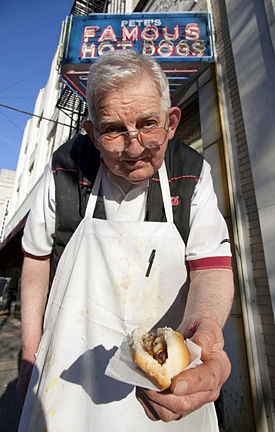 On January 18, 1948, Pete took a four-month trip to Greece to visit his aging father. His twin brother, George, who owned a fruit distribution business on Morris Avenue, stayed behind and sent his son, Gus, to run the restaurant, essentially a lunch counter, until Pete came home. Not long afterwards, Pete suffered a heart attack and Gus, his nephew, took over day-to-day business and determined to "make the best of it". He worked at the store practically every day for the rest of his life.

Before he married he often worked from 6:00 AM to 11:00 PM, seven days a week, leaving no time for any other pursuits. After marrying Kathy he modified his hours, starting the day at 11:00 AM and leaving after the lunch crowd slowed in the afternoons. He brought on Douglas Houghton as a second employee in 2007. He feared what would happen to his mind if he retired altogether.

After Gus Koutroulakis' death on April 5, 2011, the stand was closed. In May, the iconic neon sign was removed from the building and donated to the Birmingham History Center, now in the possession of the Vulcan Park Foundation.