From Bhamwiki
(Redirected from Port Birmingham)
Jump to: navigation, search 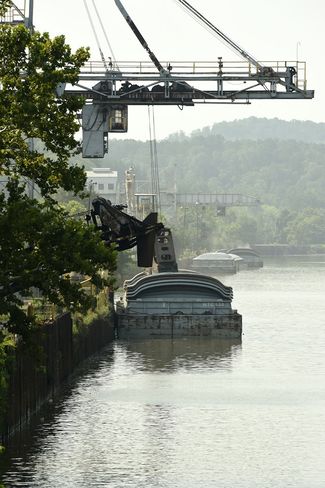 View of a barge at Birmingport by Joe Songer for Al.com (link)

Birmingport (or Port Birmingham) is a river port and rail terminal located on the Locust Fork of the Black Warrior River in northwestern Jefferson County on Alabama Highway 269 (Birmingport Road) south of Quinton.

The port was developed in 1920 by the Port of Birmingham Company, with offices in the Jefferson Bank Building. It was created in conjunction with the development of the Warrior River Barge Line, which permitted barge traffic from Birmingham to reach Mobile and New Orleans.

Port activity stretches for about two miles along the banks of Locust Fork, primarily serving the steel and road construction industries with raw materials shipped north from Mobile by barge. The port's primary export is coal from the Oak Grove Mine. Rail access to the port is by the former Barge Line Railroad, now part of the Birmingham Terminal Railway operated by Watco (formerly known as the Birmingham Southern Railroad).

In 1977, with modernization of the Tennessee-Tombigbee Waterway nearing completion, a master plan for the port was commissioned by the Birmingham Regional Planning Commission from Allen and Hoshall of Memphis, Tenneessee. The report found that little new demand would be placed on the existing private operations at Birmingport unless major investments were made to develop riverfront industrial sites. The plan recommended development of a 1,250+ acre riverside industrial park with a public terminal.

Birmingport was annexed into the city of Birmingham in 1986.

When asked for an update in 1989, a smaller industrial park and port terminal were recommended, but existing private operators were still seen as capable of filling immediate demand.

In 2010 the city of Birmingham hired AECOM to create a new study of the feasibility of using federal funds to expand and promote the use of facilities at Birmingport. The Birmingham-Jefferson County Port Authority was created in August 2016 to lobby for development of the port and market its use. The authority contracted much of its lobbying work, including operating procedures and feasibility studies, to Strada Professional Services.