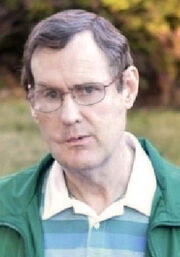 Randy, the son of James and Barbara Smith, grew up in Homewood, where he co-captained the Homewood High School football team that won an AHSAA state championship in 1974. Smith went on to join the U.S. Army before becoming a Birmingham police officer. Smith and his former wife, Wanda, had three children; Randall Brent, Leslie and Lauren.

On March 22, 1995, Smith and other officers were called to a 3:00 AM domestic dispute in Ensley. Upon arrival, officers were told an armed man who had already fired two shorts was inside along with a toddler. Smith entered the house, retrieved the toddler, and went out the front door, where he was accidentally shot in the right cheek by fellow officer Ronnie C. Hull. The bullet caused brain damage. Hull was later demoted because of the incident, being charged with several violations of department rules.

Smith spent weeks in a coma after undergoing hours of surgery at University Hospital. He was later transferred to Spain Rehabilitation Center. After months of rehab, he returned home to Pleasant Grove on October 4, 1995. Smith's injuries resulted in deafness in one ear, blindness in one eye, and diminished capability for thought and speech. He endured multiple surgeries, including plastic surgery to help restore his face, and continued to suffer from seizures.

In addition to workers' compensation, Smith's medical expenses were offset by fund-raisers organized by his friends. He visited patients at the Lakeshore Foundation and Alabama Head Injury Foundation to share his experiences. He was appointed grand marshal of the 2008 We Love Homewood Day parade and received a Quality of Life award from the mayor. Smith's friends also endowed a "Randy Smith College Scholarship" to be awarded annually to a high school senior exemplifying spirit and determination.

Smith suffered a fall in September 2020 and was undergoing rehabilitation when he had another fall in December. He died from swelling related to his injuries at UAB Hospital. Because his gunshot injuries were the underlying cause of his death, it was recorded as a death in the line of duty. He was buried at Southern Heritage Cemetery in Pelham. He was survived by his mother, brother, ex-wife, three children and two grandchildren.