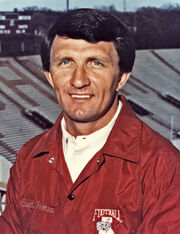 Walter Ray Perkins (born December 6, 1941 in Petal, Mississippi; died December 9, 2020 in Northport) was the head football coach for the Alabama Crimson Tide from 1983 to 1986. He played wide receiver at Alabama and in the National Football League for the Baltimore Colts, and has also served as head coach for the New York Giants, the Tampa Bay Buccaneers, the Arkansas State Red Wolves, and the Jones College Bobcats.

Perkins debuted with the National Champion 1964 Alabama Crimson Tide football team as a sophomre and saw limited action over his first two seasons. As a senior he caught 33 passes from Ken Stabler for 490 yards and 7 touchdowns. He was a captain of the team, Southeastern Conference player of the year, and an All-American selection.

The Baltimore Colts selected Perkins in the 7th round of the 1966 NFL Draft. He capped his three-year NFL career with a 68-yard touchdown catch from Johnny Unitas in the 1970 AFC Championship Game. The Colts went on to defeat the Dallas Cowboys in Super Bowl V.

In 1974 Perkins began his coaching career as an assistant to Chuck Fairbanks of the New England Patriots. He moved to the San Diego Chargers under Don Coryell in 1978 before being named head coach of the New York Giants in 1979. In four seasons he compiled a 23–34 record with a loss to the 49ers in their sole NFC East playoff game.

After Paul "Bear" Bryant retired from Alabama in 1982, Perkins was chosen to succeed him. His first team went 8–4 and beat the Southern Methodist Mustangs in the Sun Bowl. His 5–6 record in 1984, the Tide's first losing season since the Ears Whitworth era, stirred up grumbles of dissatisfaction among boosters and alumni. Perkins' 1985 and 1986 teams showed significant improvement, with 9 and 10 wins respectively, but when the Tampa Bay Buccaneers invited him to return to the NFL in 1986, he accepted the offer. In 1992 one of Perkins' recruits, Gene Jelks, accused coaches and boosters of paying him and other players. Perkins himself was not implicated, though an NCAA investigation which was completed in 1995 resulted in probation for the Alabama program.

Perkins' tenure with the Buccaneers was disappointing, with a 42-75 record. He was fired in the middle of the 1990 season and succeeded by Richard Williamson. He went on to coach the Arkansas State Red Wolves to a 2–9 season in 1992 before joining Bill Parcell's Patriots staff as offensive coordinator in 1993. He held the same position with the Oakland Raiders in 1997 before retiring from the game.

In December 2011 Perkins was announced as the head coach of the Jones County Junior College Bobcats in Ellisville, Mississippi. He resigned two years later, but continued to volunteer with Brett Favre as an assistant for the Oak Grove High School Warriors in Hattiesburg, Mississippi.

Perkins was inducted into the Alabama Sports Hall of Fame with the class of 1990. He died at his home in Northport in December 2020.