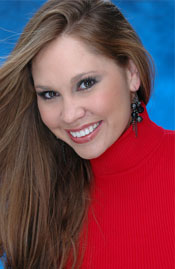 Tara Tucker Gray (born February 8, 1979 in Birmingham) is a former beauty queen who has competed in the Miss Teen USA and Miss USA pageants. She has worked as a local journalist, reporter and entertainment presenter, as well as a national TV host and reporter. Gray currently resides in Los Angeles, California where she is working as a TV host, commercial talent, model, and owns the production company salesRUSH.

Tara got her start in broadcasting as a student at Pelham High School. In 1997 competing as Tara Tucker, she was named Miss Alabama Teen USA and represented the state at the Miss Teen USA pageant. She worked as an anchor on Eagle Eye News at Auburn University, where she graduated in 2000 with a major in mass communication and minors in psychology and Spanish. In 2002, she won the Miss Alabama USA pageant and placed 9th overall at that year's Miss USA pageant in Gary, Indiana.

From there she began working as an associate producer for WBRC FOX 6. She moved to WABM in 2003 hosting the entertainment news segment Tara Talk and as an entertainment reporter for sister station WTTO CW21. She served as the spokesperson for WABM and hosted numerous locally-produced segments for both stations, including Teen Cuisine, That's My Jam in the Ham, and the local segments of the annual United Negro College Fund telethon.

She also provided daily news reports to 56 radio stations for Metro Networks/Westwood One. In addition, Gray provided traffic reporting for FOX 6 News' Daybreak and Good Day Alabama programs as well as for WBHJ-FM, WBHK-FM and WAGG-AM.

Gray moved to Los Angeles to work as a TV host. She has worked as on-air talent for GemsTV, KDOC-TV Los Angeles, and now ownes her own production company, salesRUSH. The company produces content for TV stations and reality TV shows, and includes media buying, publication and internet divisions.

Gray is married and volunteers for the March of Dimes, the Susan G. Komen Foundation, the Muscular Dystrophy Association of Greater Alabama and the American Diabetes Association.