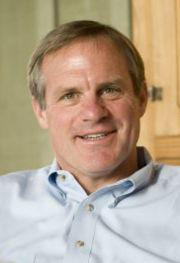 Tim James (born March 3, 1962 in Opelika) is the son of former Alabama Governor Fob James and a two-time Republican candidate for Governor.

James graduated from the Baylor School, a private academy in Chattanooga, and followed his father's footsteps from there to the Auburn Tigers football team. While still in school, James married the former Angela Whittle. He graduated with a bachelor's degree in finance from Auburn in 1985 and went into the asphalt and paving business. In 1986 he joined with his father and brothers to form the Escambia County Environmental Corporation, a developer of landfills and waste incinerators. The company was purchased by BFI in 1996.

That same year, James and McInnis Construction formed the Baldwin County Bridge Company, taking advantage of legislation signed by his father to erect a toll road between Orange Beach and Foley. The project benefitted from a publicly-funded bypass connecting it to Alabama State Highway 59. Fob James signed the state's contract with the city of Foley that released federal funding just days before leaving office. James and his partners sold the bridge to the Macquarie Infrastructure Group of Australia for $70 million in 2005. It is now owned by Alinda Capital Partners of New York, whose American Roads division took over operation of the bridge and has raised tolls twice since 2007.

James and his wife Angela reside in Greenville and have three children, Fleming, Tim Jr, and Sarah.

James launched his first campaign for Governor in the 2002 Republican primary, finishing third. In 2003 James joined with other critics of Bob Riley's "Amendment One" ballot proposal to overhaul the state's tax system. Their "Alabama Tea Party" helped convince voters to defeat the measure by a 2-1 margin that September.

He did not run in 2006. In the 2010 Republican primary campaign he was again polling poorly until one of his television ads, produced by Strategic Perception Inc. of Hollywood, California, triggered a national media backlash. In the spot, James promises to give driver's license examinations only in English if elected. The media attention gave James an immediate boost, making him the front-runner in some polls taken weeks before the June 1 ballot.