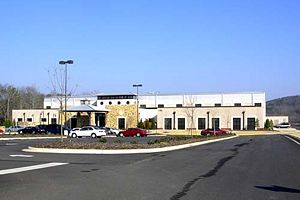 The Trussville Civic Center is located at 5381 Trussville-Clay Road adjacent to the new Hewitt-Trussville High School. The 67,500 square foot, $10 million, one-story structure is a replacement facility for the John C. Yarbrough Community Center on Parkway Drive. Completed in 2008, the center features an exhibition hall, a full-sized kitchen and several meeting rooms. Designed by Davis Architects, its architecture compliments that of the neighboring new Hewitt-Trussville High School.

On Tuesday, November 14, 2006, the Trussville City Council unanimously rezoned the parcels at 5460 Trussville-Clay Road from one institutional zoning to a more appropriate one to allow for the construction of the new building. Construction commenced in 2007 and the center saw its official ribbon cutting on October 13, 2008.