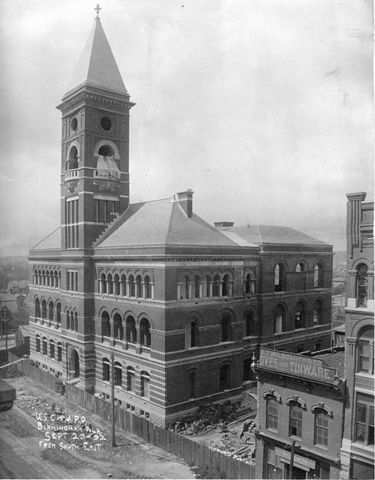 The Court House and Post Office under construction. September 29, 1892

The United States Court House and Post Office, was a federal courthouse and post office constructed in 1893 on the northeast corner of 2nd Avenue North and 18th Street in downtown Birmingham.

The design and construction of the building, which began as early as 1891, were overseen by William A. Freret of New Orleans, who had been appointed Supervising Architect of the United States in 1887. Freret had earlier completed three of the buildings surrounding Woods Quad at the University of Alabama. The design of the courthouse employed the Richardsonian Romanesque style with round-arched windows separated by thick-capped columns. The basement floor featured rusticated stonework while the first floor combined brick with limestone in a pattern of contrasting stripes. The upper floors were comprised mainly of brick with limestone trim at the springlines and for colonnettes. The steep hipped roof of the main building was surmounted by a large square tower with outward-bowed balconies at the belfry and circular clock faces above. Its steep pyramidal roof was crowned with a cross-shaped pinnacle. The 18th Street entrance had its own projecting gable and the rear wing of the building had a shallower hipped roof with a flattened peak.

The courthouse was torn down in the 1920s to accommodate the expansion of a nearby retail store. That project was never realized and the lot was used in 1970 for a parking deck for Loveman's department store. The deck continues to serve the McWane Science Center.