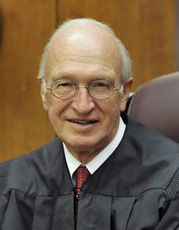 George William Noble (born c. 1938) is a former city attorney and Mayor of Gardendale and a Circuit Court judge.

Noble grew up on a cattle ranch in the Sandy Ridge community of Lowndes County. The first from his family to attend college, he earned his undergraduate degree in business in 1960 at the University of Alabama. He was hired by the Alabama Department of Transportation to assist in the acquisition of right-of-way for I-65 and was inspired by the court actions he saw to study law. He completed his law degree at the Birmingham School of Law and began his career as a member of the firm of Speir, Robertson, & Jackson in 1966.

Two years later Noble joined a partnership with James Tingle and Robert Barnett and began serving as Gardendale's city attorney in 1968. In 1972 he was elected mayor, and re-elected five times, serving until 1996, at which time he resumed acting as city attorney for two years.

Noble was appointed to the Circuit Court in 1998 and won elections to keep his seat in 2000 and 2006. He retired from active to senior judge status effective January 3, 2011, two years before the end of his term.

The G. William Noble Recreation Complex in Gardendale is named in his honor.