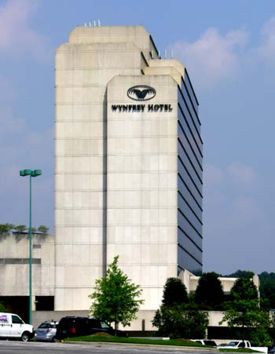 The Hyatt Regency Birmingham - The Wynfrey Hotel is a 15-story 329-room luxury hotel and conference center constructed in 1986 as part of the Riverchase Galleria shopping mall in Hoover. Formerly designated a Four Diamond property by the American Automobile Association, it is the area's second-largest hotel and is best known for hosting the annual SEC Media Days event, which attracts a large national press contingent.

The mall, hotel and associated office tower were jointly developed by Montgomery's Jim Wilson, formerly of the Aronov Realty Company and Colonial Properties. The name of the property combines Wilson's middle name, "Winfrey" with his wife's name, "Wynona".

The architect for the complex was William P. Lacey of Hellmuth Obata Kassabaum's Dallas, Texas office. The exterior materials of smooth precast concrete and tinted glass are combined in a strongly-graphic black & white composition on the hotel's broad facade. Interior designer Deborah Lloyd Forest, also of Dallas, gave the public spaces and guest rooms a much more traditional feel with wood paneling, marble floors and antique and polished bronze fixtures.

The hotel's rooms are decorated with damask wallcoverings and Italian marble fixtures. The 1,650-square foot, two-story "Presidential Suite" features an oversized jacuzzi tub and cedar sauna upstairs and hand-carved furniture in the master bedroom. Guests have access to a health club and spa, outdoor rooftop pool, the two-story Chancellor's Club, and two restaurants and a lounge. The hotel also has 32,000 square feet of meeting space accommodating up to 800 banquet guests or 1,200 for meetings and receptions.

A planned $8 million expansion of the hotel, with 74 new suites and a 4,800-square foot ballroom was designed in 1996 by Crawford, McWilliams & Hatcher Architects, but was never constructed. In 2002 the hotel created a special floor catering to female guests with mirrored vanities and other touches.

The conference center's largest event is the Southeastern Conference's annual "Media Days", which began meeting there in 1988. After four years the event moved to the Medical Forum at the Birmingham-Jefferson Convention Complex, but returned to the Wynfrey in 2001.

In 2009 the Davidson Hotel Company of Memphis, Tennessee was awarded the contract to manage the property, assigning vice-president Andy Peters as the Wynfrey's general manager.

In 2010 Jim Wilson & Associates defaulted on the Wynfrey's 2005 mortgage with Citigroup Global Markets Realty, placing the hotel in foreclosure pending renegotiation. Two years later the company announced plans for a $90 million renovation of the hotel, financed with investment from RockBridge and $25 million in incentives form the city of Hoover. After the renovations, the hotel was rebranded as a Hyatt Regency.