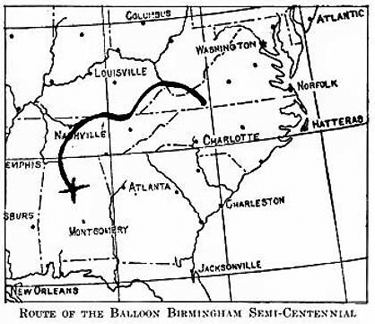 Route of the winning balloon

The 1921 National Balloon Race was a ballooning competition launched from Birmingham on May 21, 1921.

Following on the success of the 1920 International Balloon Race held in Birmingham the previous year, the 1921 National event was a centerpiece of the city's celebration of its "Semicentennial" year. Senator Tom Heflin also secured a visit by the U.S. Navy's 162-foot-long E-1 blimp from Pensacola, Florida to Birmingham to help fill the skies with excitement during the launch.

Upson, a 1913 winner of the Gordon Bennett Cup and veteran of numerous major balloon races, captained the Birmingham Semi-Centennial with C. G. Andrus of the U.S. Weather Bureau. He thanked the city for its hospitality in the days leading up to the race, and credited his teams study of minor air currents for their ability to outdistance their competitors in the largely low-altitude race.

The balloons launched in the evening of May 21 under a brilliant moon. Though scheduled for a 5:00 launch, weak pressure from the coal gas reservoir used to fill the balloons meant that the "Atascadero, Cal.", which drew first, did not lift off until just after 7:00 PM. Its captain, John Berry of St Louis, Missouri, was the oldest competitor at 75.

Upson and Andrus concentrated on making distance during the night, and by 7:00 the next morning the Semi-Centennial had already been carried far enough from Birmingham to win. Upson considered setting down after a frustrating day of stationary air, but evening brought a northward stream of air, visible from chimney smoke in the mountains, which they caught, having to keep low and just barely clearing the ridges of the Southern Appalachians in the crests of the wind. Though picturesque, the lack of a suitable landing site began to concern the crew, especially as the valleys filled with afternoon fog and the moon disappeared behind clouds. Morning in the Blue Ridge Mountains presented a whirlwind which Upson escaped by emptying three bags of sand ballast and lofting to about 8,500 feet above the clouds. The air at that altitude, however, began pushing them southward and so they lowered the balloon in search of a landing place. A field appeared and they made an easy landing at 7:40 AM on May 23 after 34 hours and 40 minutes aloft. The huge, spherical balloon's descent lured a small crowd of gawkers to the site. One woman fainted "because she thought the end of the world had come."

Not until the next day did the victors learn that the Birmingham Semi-Centennial had more than doubled the distance claimed by the second-place team. The top three finishers qualified to represent the United States at the 1921 International Spherical Balloon Race to be launched from Brussels, Belgium in September. Upson and Andrus brought the Birmingham Semi-Centennial balloon to represent the city in that contest, but the craft was disqualified by local officials. Competing instead with a bag borrowed from the Belgian balloonist Ernest Demuyter, they finished third in the 14-team competition after a landing on Lleyn Peninsula in North Wales.