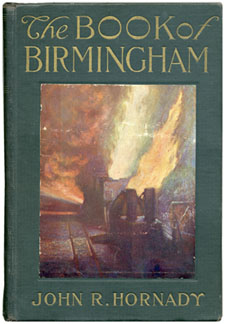 The Book of Birmingham is a celebratory history of Birmingham published in time for the Semicentennial of Birmingham in 1921. The text is by former Birmingham City Commission member John R. Hornady with illustrations by W. Paul Pim. The cover illustration, pasted onto the green cloth, is a reproduction of "Three Bessemer Converters", an oil pastel by Roderick MacKenzie of the Tennessee Coal Iron and Railroad Company's Ensley Works.