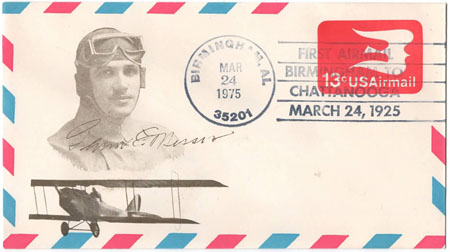 The 1925 Birmingham to Chattanooga demonstration flight was completed to demonstrate the practicality of including a link between Birmingham and Chattanooga, Tennessee as part of a planned North-South air mail route from Chicago, Illinois to New Orleans, Louisiana.

The demonstration took place on March 24, 1925 under a temporary U.S. Postal Service commission secured through the efforts of Postmaster J. G. Bass.

The morning flight took off into clear, cold skies shortly after 5:00 AM. A stiff headwind limited their range and the pilots stopped briefly at a Gadsden country club for refueling before crossing Lookout Mountain and arriving in Chattanooga two hours and ten minutes after their departure, about half the time of a Birmingham to Chattanooga railroad trip. The flyers were greeted by a sizable crowd and given a morning reception before their return trip.

In Chattanooga the already-canceled commemorative envelopes were given Chattanooga postmarks on the backs. Meanwhile another package of newspapers and 64 letters from Chattanooga business leaders was picked up. They also took on board a copy of the promotional film, The Air Mail, which Turner would screen at the Photo-Play Theater as part of his efforts to secure the service for Birmingham. Fellow promoters boasted that the flight, "clearly demonstrated the feasibility of air mail in the South," but it was not until December 1, 1928 that regular contract air mail service became available in Birmingham.

Messer recreated his historic flight on March 24, 1975 under another temporary commission, and carried another batch of commemorative envelopes to be postmarked in Chattanooga for the 50th anniversary of the demonstration flight.