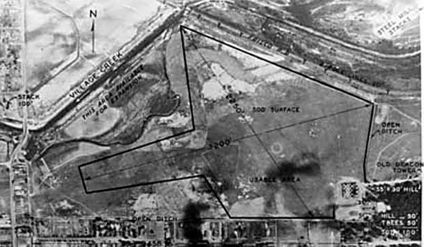 Roberts Field was an early airfield serving as Birmingham's primary airport from 1922 until completion of the Birmingham Municipal Airport in 1935.

Roberts Field was located west of Downtown Birmingham and north of Dixie Field in the present Thomas neighborhood. The 90-acre site was bounded by Village Creek and the Frisco Railroad to the north and by 13th Street Ensley to the south. Its 3,200 foot main runway area ran southwest-northeast across the property. Its hanger buildings were located on the southeast corner, near present-day Roberts Industrial Drive and the right-of-way for I-20/59.

The site was donated to the newly-formed 135th Observation Squadron of the Alabama National Guard by a local steel company. The squadron, under the direction of James Meissner, did the work of developing the airfield with salvaged and donated materials. By the end of July the unit was operating a fleet of seven Curtiss JN-4D "Jenny" airplanes, housed in metal hangar buildings.

The field was dedicated on June 5, 1922 in honor of Birmingham's Arthur Meredyth Roberts who was killed in action while flying over France in World War I. In 1923 the 135th was redesignated as the 114th Observation Squadron, still based at Roberts Field. The Navy Zeppelin ZR-1 "Shenandoah" made a visit to Roberts Field in 1924. On May 24-25 of that year the field hosted the, "biggest United States air meet ever staged in the Southern States," featuring a 100-mile speed derby divided into two heats and a "pageant" of 30+ airplanes buzzing over the city in formation.

On October 5, 1927 trans-Atlantic aviator Charles Lindbergh brought his "Spirit of St Louis" to Roberts Field for a two-day stop on a 22,000-mile promotional tour sponsored by the Daniel Guggenheim Fund for the Promotion of Aeronautics. He left again on October 7, bound for Jackson, Mississippi.

The city's first commercial passenger air service was operated from Roberts Field beginning on May 2, 1928. St Tammany & Gulf Coast Airways included a stop there on its CAM-23 New Orleans-Atlanta air mail route. Delta Air Service began using the field in late 1929 for their 6-seat Travel Air service from Dallas to Birmingham. American Airways was unable to land their Ford Tri-Motor planes there. That fact, joined with the enthusiastic speech given by Lindbergh two years earlier, prompted the city to begin construction of its new Municipal Airport, opening in 1931.

Roberts Field remained open for at least a decade or two more. Glenn Vocational School was built on part of the former airfield in 1952. The remaining land was not redeveloped for industrial uses until the 1960s. The site is currently operated by Consolidated Pipe & Supply as a pipe-coating shop.