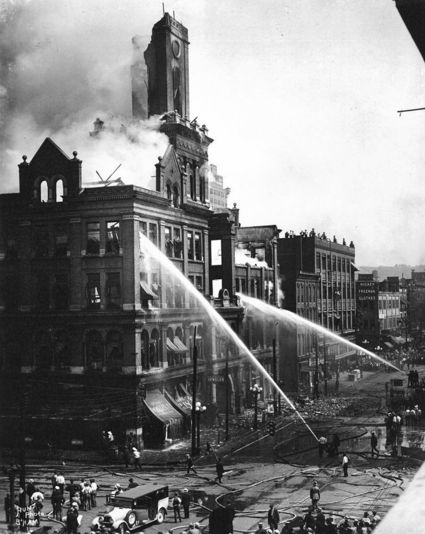 O. V. Hunt photo of the fire in progress

The 1925 City Hall fire took place on April 23, 1925, causing extensive damage to the upper floors of Birmingham City Hall, then located at the corner of 19th Street and 4th Avenue North.

Almost the entire collection of the then 12-year-old Birmingham Public Library was destroyed. The lower floors were relatively unscathed and the city repaired the damage, except for the tower and attic dormers, which were not rebuilt.

The city temporarily rented space in the newly-completed Martin Office Building, four blocks west, for Birmingham City Commission meetings and departmental offices. The library, which had received donations from around the nation for rebuilding, re-opened in 1927 in a new monumental building at Woodrow Wilson Park

After the City Hall was restored, the building continued to serve through another 1944 fire before a new Birmingham City Hall was constructed at Woodrow Wilson Park in 1950.